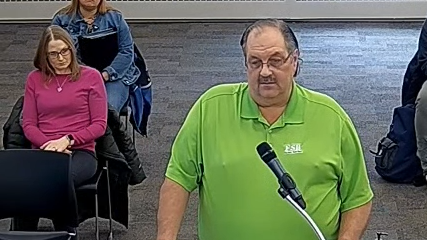 Don O'Connor speaks before the Clear Lake City Council at a January 5, 2022 meeting

MASON CITY — The candidate who for the time being has unofficially lost the Cerro Gordo County Board of Supervisors District 3 race by five votes says he’s disappointed with Tuesday night’s results, but says he’s exploring his options.

Republican Don O’Connor lost to Democrat Lori Meacham Ginapp 2280-to-2275 and says it was tough to see the final numbers be so close.  “When you look at neither candidate got to the 50% threshold mark, it was a very tight race. So, it is what it is and we’ll take a look and see where we move on from here.”

O’Connor says there are potentially some provisional ballots that have not been counted and that a recount is an option he might exercise.  “There are some potential provisional ballots that are sitting out there that might need to be dealt with that somebody filled out yesterday, they just couldn’t count them yesterday, so they have to confirm them and see where that goes. At some point next week if we decide a recount is in the best interest of the voters of Cerro Gordo County, we will call for it if that’s what we deem necessary. We have to wait and see everything come in yet and sit down and study that.”

O’Connor says he would call for a recount just to make sure that everything was accurate in the final count.  “If we do a recount, it is strictly to make sure the results are accurate, and if they are accurate, great, we will abide by them. That’s not a problem, that’s what we said all along. We’ll wait and see.”

The election is not official until the Board of Supervisors accepts the canvass of the election at a special meeting at 2 o’clock next Tuesday at the courthouse.