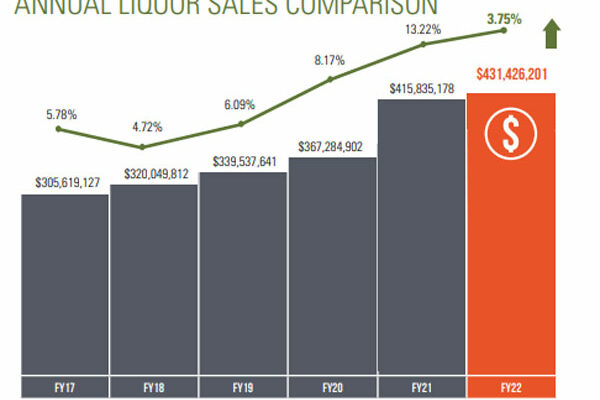 State liquor sales revenues were up by nearly four percent in the fiscal year that ended in July, in what was the lowest increase in five years.

Sales last year were up 13%, and Iowa Alcoholic Beverages Division Chief Financial Officer, Leisa  Bertram, says things appear to be leveling off following a pandemic sales surge. “Every year we kind of budget between three and five percent would be a normal increase. So yeah, the last couple of years having a large increases are definitely an outlier. This is where I would say yeah, 3.75% is more of a normal increase,” Bertram says.

The gallons of liquor sold dropped by 70,000. “One of the main reasons is our top seller this year was Tito’s (vodka). Historically, it’s been black velvet for about the last 10 years. So Tito’s is a little higher price product. So selling, you know higher price items, and then also selling more full cases,” Bertram says. Liquor sales brought in $431 million, and a record of just more than $150 million  from liquor sales was turned over to the state along with another $19 million in licensing and taxes.

Another factor in the liquor sales was a continued increase in the number of convenience and smaller stores that obtained licenses. Bertram says those stores usually have a smaller inventory. “But they do make up a good amount of our of our licensees. And so yeah, the distribution of those, you can get liquor at more places,”” Bertram says.”But again, the variety might not be as big at some of those smaller stores. But we are seeing a trend towards smaller footprint stores. We have some major retailers that are opening smaller footprint stores as well.”

Bertram says the supply chain issues did create some issues for specific products. “So we did see more out of stocks this year, you know, based on those supply chain constraints. What we didn’t see, though, is when we were out of stock on an item, our customers would kind of pivot to another item,” she says. “So we weren’t necessarily losing sales — but we were losing sales on those specific brands.”

She says people were able to kind of pivot and find a replacement their favorite drink — and that included instate native distillery items that are available.”So if people couldn’t get what they really needed, or what they got into in the past, we were able to kind of step in line with other brandsm,” Bertram says. December is one of the top months for alcohol sales, and the sales this December will be part of the new fiscal year numbers.

Bertram says early indications are the recent sales trend is continuing. “We’re just about the same increase as we were at the end of this fiscal year report. So year to date, we’re at about four percent increase over last year,” she says. So, I’d say our revenues are still strong, we’re still pulling in good revenue. But we’re not seeing those huge increases, you’re seeing a small increase. And it’s, again, more indicative of what we’ve seen in the past. ”

Bertram says the cost of some products has gone up, while the cost of others have gone down, so overall costs haven’t gone up that much for liquor despite inflation.