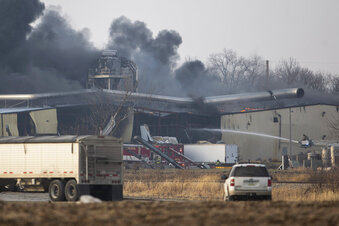 Firefighters work to control a blaze at a grain elevator, Thursday, Dec. 8, 2022, in Marengo, Iowa. An explosion has caused injuries and an evacuation of people near the operation. The explosion and fire happened about 11:15 a.m. Thursday in Marengo at a grain elevator owned by Heartland Crush. (Joseph Cress/Iowa City Press-Citizen via AP)

MARENGO, Iowa (AP) — An explosion and fire at an agricultural plant in eastern Iowa has caused injuries and an evacuation of people near the operation. The explosion and fire happened about 11:15 a.m. Thursday in Marengo at a plant owned by Heartland Crush, a soybean crushing company.

A University of Iowa Hospitals spokesman says they treated 10 to 15 people following the explosion Thursday.

Doctor Teri Brennan says they were fortunate that many were able to be treated and released. “We can’t comment on the specific conditions of the patients but I can tell you that the majority of them were in the minor to moderate category,” Brennan says.

Brennan says they were given plenty of warning that patients were on the way and were able to handle them without any problems. “We saw a variety of injuries in patients ranging from you know routine minor cuts and scrapes to burns and trauma,” Brennan says.

Doctor Brennan says their emergency room has been pretty full with respiratory cases, but they were able to make room to handle these patients.