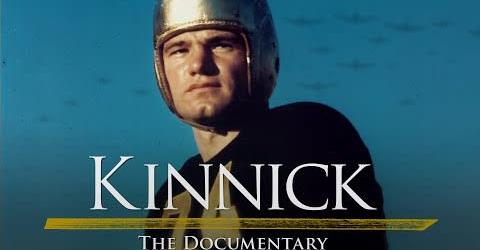 DES MOINES — Hawkeye football legend Nile Kinnick, who won the Heisman Trophy in 1939, is the subject of a new 90-minute documentary that’s on the big screen in select Iowa theaters and online via the website Vimeo.

Iowa filmmaker Scott Siepker says “Kinnick: The Documentary” offers audiences an in-depth look into Kinnick’s riveting journey of hope, duty and perseverance, from his rise to fame on-field at the University of Iowa to his service during World War Two.  “His family did a really nice job of preserving a lot of his letters and journals and so has the University of Iowa Archives,” Siepker says. “The amount of material we had access to, you’ll see this in the film, it’s pretty incredible. I mean, there’s dozens and dozens and dozens of photos that you’ll see of Nile throughout this film that you’re gonna be like, ‘I have never seen that photo before.'”

One of the people interviewed for the documentary is Don Bice, who was Kinnick’s first cousin. Bice, who’s now in his mid-90s, also grew up in Adel and was about the same age as Kinnick’s youngest brother, George. “He would practice with Nile, he’d help Nile practice, him and George would, they’d catch passes and punts from Nile,” Siepker says. “This is somebody who actually did this, the only person left on the planet who can say that they did that. He provides us with these vivid, emotional, firsthand accounts of what it was like to actually be in the presence of Nile Kinnick.”

From pouring over his letters and war journals, Siepker says it’s clear Kinnick had a wonderful sense of humor. He also had a clear plan laid out for his future which included finding a great woman to marry and with whom he could start a family, to finish law school, and to enter a life of public service. Siepker says many historians believe Kinnick could have become a U-S Senator — and risen even higher.  “When you see this film and you hear his voice and you see his look and you realize how famous he actually was, Nile Clarke Kinnick Junior absolutely could have been president,” Siepker says. “Just imagine the world being different, if instead of Richard Nixon being the darling of the Republican Party back then, if Nile Clarke Kinnick Junior was, how different this country — and this world — would have been.”

Kinnick left law school after his first year and enlisted in the U.S. Navy Air Corps Reserves. He was killed in 1943 while on a training flight from the aircraft carrier USS Lexington off the coast of Venezuela. Kinnick was 24.

After five years of working on this documentary, Siepker says he’s been reminded that, “our heroes are the most inspiring when we remember that they are not that different from the rest of us.”  “It’s one of those ideas like, I think when you see the film, a lot of people are reacting like, ‘How has this never been done before? This is such an interesting topic. Why has nobody ever thought to do a feature length film on Nile Kinnick?’ and I feel the same way about Jack Trice,” Siepker says, “so we are pursuing that documentary as well.”

Trice was Iowa State University’s first African-American athlete, who died of injuries sustained during a 1923 game. The I-S-U stadium is named for Trice, just as the University of Iowa’s stadium honors Kinnick.