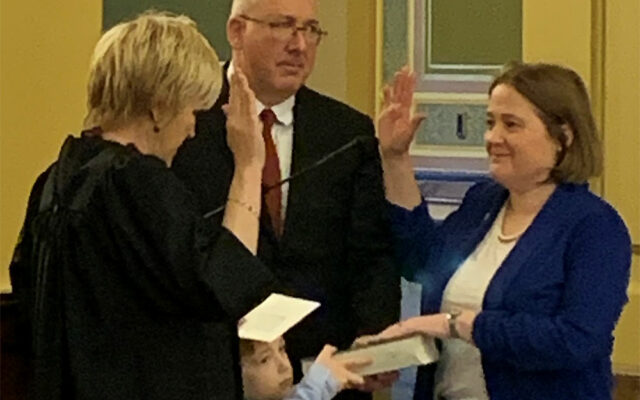 Brenna Bird sworn in by the Chief Justice (RI photo)

DES MOINES — Iowa Attorney General Brenna Bird is the first of five statewide officials elected in November to hold a public ceremony to recite their oath of office.

Bird, who officially started her term on Monday, told a big crowd in the Capitol’s rotunda yesterday that she was just getting used to speaking about her new post in the present tense.

“I’m going to take the values I learned on the farm, work hard, do the right thing and get the job,” Bird said. “That’s my commitment: to uphold the laws and the constitution.”

Bird is the first Republican in 44 years to serve as Iowa Attorney General. She acknowledged Tom Miller, the Democrat she defeated, who attended the ceremony. “You have been so helpful to us, so gracious to us in every way. I appreciate your service and your courtesy and your approach to your work as a lawyer. Thank you,” Bird said and the crowd stood to applaud.

Republican Governor Kim Reynolds, who will be inaugurated for a new four year term next Friday, campaigned extensively for Bird. Reynolds said Bird is taking office “at just the right moment” to challenge Biden Administration policies.

“America’s form of government rests on federalism, which limits the powers of Washington, D.C. while protecting the rights of the states and most importantly the rights of its citizens, but so often our leaders in Washington get it backwards,” Reynolds said. “They disregard the democratic process within the states on issue after issue.” 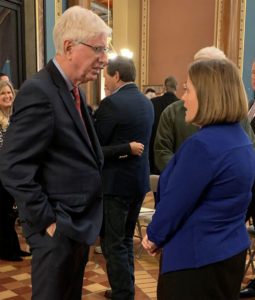 “To them, the states are simply in the way,” Reynolds said. “Well, they’re right about one thing, at least. States like Iowa are definitely in the way and with Brenna in the AG’s office it will be no easy thing to push us aside.”