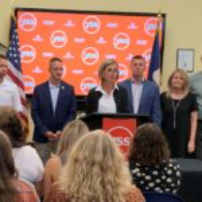 “Health care professionals and patients who rely on Iowa’s mental health system deserve this sustainability and predictability this funding source will provide,” the governor said during a bill signing ceremony at an Ames shelter for troubled youth.

Reynolds called the entire plan, which includes tax credits for fire fighters and food banks, a landmark piece of legislation.

“We are not done yet. Next year we’ll be back and I’ll be proposing to cut our personal income taxes even further,” Reynolds said, pausing, then adding: “I thought that’d get a round of applause.”

The roomful of legislators, lobbyists and advocates for various tax policies laughed and applauded. Reynolds told reporters after the ceremony that she’ll consider all options for lowering personal income taxes, but isn’t ready to release a plan.

“States across the country are continuing to bring theirs down and if we’re going to remain competitive, we’re going to have to take a look at that,” Reynolds told reporters. “We’ll make sure that we do it in a responsible manner and that we can maintain priorities that are important to Iowans.”

The state’s fiscal year will end on June 30th and current projections indicate the state will have a roughly $500 million surplus.

“(For) hard working taxpayers, if we’re overcollecting, we should make sure we get that money back to them,” Reynolds said.

The governor’s ultimate goal is to erase the personal income tax altogether.

“If you listen to governors, that’s kind of their goal in several states and I mean multiple states,” Reynolds said. “…Taxpayers win when you’ve got governors that are competing to create an environment that not only helps Iowans and Iowa families keep more of their money, but also to create an environment where businesses want to invest and grow, hire Iowans and really drive the quality of life that we want all Ioawns to be able to enjoy.”

Reynolds said it won’t be easy to come up with a proposal given Iowa’s complicated system of income tax credits and figure out how an adjustment in rates may impact different types of taxpayers.