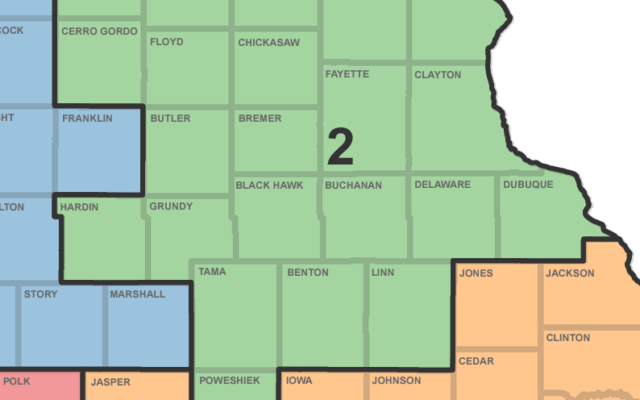 MASON CITY — Republican Congresswoman Ashley Hinson and her Democratic challenger Liz Mathis made their final trips through the new 2nd District over the weekend, with each making stops in Mason City.

In talking with KGLO News after the sendoff for the 1133rd Transportation Company on Sunday morning, Hinson said she was looking forward to the final days of the campaign.   “I’m excited for Tuesday. I think that this country needs some changes and I think that we’re going to deliver a lot of those changes on Tuesday night.”

Hinson says her final message to undecided voters on why they should choose her is that she still believes America is the greatest country in the world and that we still have a lot of promise.  “The reason I would ask for people to support me is because I’ve clearly stood up for taxpayers, stood up for rural America and our values, and made sure that I was fighting for safety and security in our communities, which is again why I’m here today. I think it’s important that you have someone who you can count on to do those things. We understand we can’t afford another two years like the last two, and so I’ll offer that check on the administration and I look forward to continuing to serve Iowans.”

Hinson says the one main complaint she keeps hearing from people while campaigning is inflation.  “Everywhere I go it’s inflation directly connected to energy prices, so I look forward to making sure we’re delivering policies that can help drive down costs for every Iowan and every family.”

Mathis talked on Saturday morning to a group of Cerro Gordo County Democrats and says she’s optimistic about the election outcome when looking at the number of people who have already voted by absentee.  “People are engaged. It’s where we want them to be. They are understanding what the issues are like costs to families. We want to bring those costs down. Protecting Medicare and Social Security, absolutely, and protecting reproductive rights. We’ve been hearing that at the doors and on the phones and everywhere we go. We’re pushing, making sure that people will vote on election day, and when they do, I hope they vote for me, Liz Mathis.”

While most of the district is familiar with Mathis and Hinson from their days when they were both anchors for Cedar Rapids-based television stations, many in the Mason City-Clear Lake area may have not been familiar with their faces. When in Mason City in mid-September for a door-knocking tour of Mason City, Mathis told us many people didn’t recognize either of the candidates’ names. She says that’s now changed.  “It has worked out, it really has. We started advertising more on television and started sending mail out. So when I ask people ‘you know you’re in the Second District’, yes they do know. And the people who have already voted, yes, they do know.”

Mathis says her message for undecided voters is that she wants to protect and preserve her constituents’ way of life.  “And their way of life is expensive right now, and we need to bring those costs down, and there are a number of ways we can do that. E-15 was a good start to keep our gas prices lower than the rest of the country, but we need to do more. We need to drill. We need to stand up to OPEC, and we need to unleash that supply chain. The supply chain is still clogged. We need drivers behind the wheel, so we have a lot of work to do. I don’t see Ashley Hinson doing that. She complains a lot but she doesn’t do much.”

The new Des Moines Register/Mediacom Iowa Poll shows 49% of the likely 2nd District voters say they would vote for a Republican candidate for the US House, while 47% would support a Democrat. The poll’s margin of error is 6.6%The new Second District includes Cerro Gordo, Worth, Mitchell, Floyd and Butler counties in our immediate listening area as well as Cedar Rapids, Waterloo, Dubuque and northeastern Iowa.