Drought conditions persist across the state 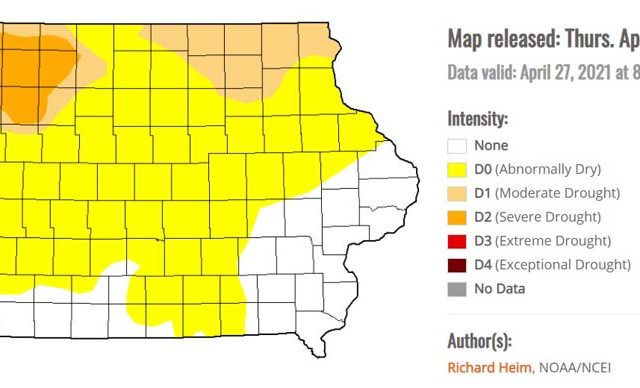 DES MOINES — April wrapped up on a very dry note and the state’s drought conditions are worsening in some areas.

State climatologist Justin Glisan says the latest drought map from the U-S Drought Monitor has a new “D-1” area of moderate drought that’s appeared in northeast Iowa. Also, the vast majority of the state is now considered abnormally dry, which Glisan says is something of a warning. “We’ve had a significant expansion of that D-O or abnormally dry category,” Glisan says. “As a reminder, that’s not drought but it is a sentinel for us to recognize that we are seeing drier-than-normal conditions, given precipitation deficits through late spring.”

The map shows the northwestern area of the state continues to be the driest.  “We have that existing D-2 severe drought region there,” Glisan says. “Now, we haven’t seen any recent degradation as we have had precipitation fall, sometimes at timely levels. We’re still keeping a close eye on that northwest corner, given the longer-term precipitation deficits that we see there.”

On the plus side, in recent weeks there was a large patch of D-3 — or extreme drought — covering several northwest Iowa counties, which is just below the worst category, D-4, for exceptional drought. This latest map shows no D-3 in Iowa at all.

All of north-central Iowa is in the D-0 abnormally dry category, but all of Mitchell, most of Worth and Floyd, and the eastern part of Winnebago counties are in the D-1 moderate drought category.