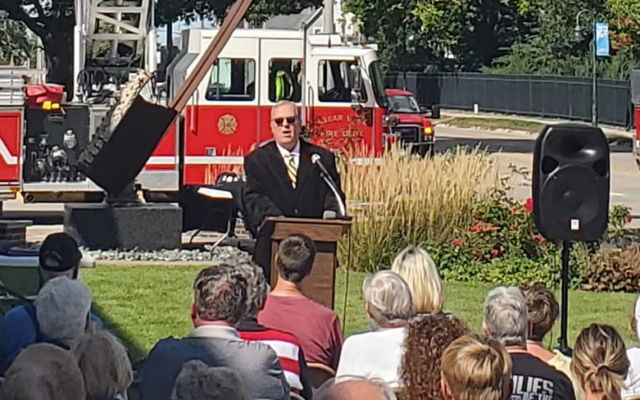 CLEAR LAKE — The 21st anniversary of the 9/11 attacks was remembered during a ceremony on Sunday afternoon at the Clear Lake Fire Department.

Retired Clear Lake firefighter and Zion Lutheran pastor Dean Hess was the guest speaker. He was also part of a group of firefighters who went to retrieve the piece of steel from the World Trade Center ruins in 2011 that would be placed in a memorial outside of the fire department headquarters.

Hess says it was a harrowing memory of going into a storage facility where the piece of steel housed the ruins of the World Trade Center.  “I will never forget the sight of fire apparatus that had responded to that call, crushed and shattered by the debris of the building that fell on them when the towers collapsed. Ladder trucks and engines demolished and flattened. I could not help but think of the firefighters who had manned that apparatus. For the first ten years that I served on the Clear Lake department, I lived and worked fairly close to the fire station, so I was often the first person to respond to calls. As such, I was frequently the engineer and drove and operated the apparatus at the fire scene, so it was not hard to identify with the firefighters who had operated the destroyed apparatus that I was at that storage facility.”

Hess says people need to continue to remember those who sacrificed their lives on that tragic day.  “We do not want to hear anyone ask why we gather on this day every year to remember. We do not want to hear questions about the seriousness and importance of this day or its relevance to our lives today. We gather and remember to honor those who died and those who suffered and those who were so terribly traumatized. We gather to pay our respects to the brave men and women who responded to this disaster, and we gather to alert ourselves that we must remain on-guard against those who try to attack and destroy freedom-loving people.

Hess says the welcome they received when they got home with the piece of World Trade Center steel was overwhelming. He says he and his fellow firefighters are proud of the memorial and what it means.  “Our original design for the memorial called for the piece of steel to be surrounded by a reflecting pool, but the Port Authority would not allow us to display it that way. They insisted that the piece of steel be accessible so people could walk up to it and touch it, and feel some of the hard reality of that horrible day.  That piece of steel came from the north tower, and those towers were 1000 feet tall. I’ve often wondered how far this piece of steel fell. I encourage you to walk up and touch it, and take a moment to once again call to mind all that happened that fateful day.

After the ceremony, a number of fire trucks and emergency response vehicles took a lap around Clear Lake in a solemn parade with only their lights on and no sirens.

Listen back to the ceremony here