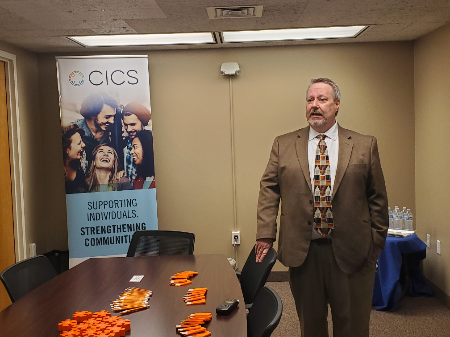 The county’s Board of Supervisors last September approved joining “CICS”, formerly known as Central Iowa Community Services. The county had been among 19 counties that were part of “County Social Services” which provided financial support for mental health and disability services programs to individuals. The county the last few years had been exploring leaving County Social Services due to concerns raised about rising costs and quality of services in the region.

CICS CEO Russell Wood says his organization has also added Hancock, Wright and Webster counties to their region starting this month.  “We are looking forward to working with the counties that we have added. We added four counties as of July 1, and we’re working hard to get things up and running.”

Wood says they’ve been working with their provider agency at CICS to start mobile crisis response and community-based crisis stabilization.  “We started the community-based crisis stabilization in January of this year. Mobile crisis we started about three years ago. It’s a core service, it is supposed to be statewide at this point in time. Some regions have been successful in getting it up and running. It is not an inexpensive service, and one of the nice things about adding counties, especially counties with a population base of Cerro Gordo, it gives us the critical mass to be able to invest in those types of services and bring those services to the people that need them.”

Wood says he’s already had conversations with local organizations about strengthening their programs.  “At 43 North Iowa, I’ve had conversations with the director there John Derryberry about developing his crisis stabilization, looking at intensive residential services homes. I’ve had a conversation with Lori Young at Prairie Ridge about looking at starting up certain community treatment which will be a good program as well that will help the folks of North Iowa.”

Wood says he’s working on enhancing crisis services in the county.   “I know in our conversations with the chief of police here in town that one of the things they look at is they have a significant amount of intervention with clients that we work with. Our goal is to have more crisis services available to be able to meet with people before law enforcement has to be involved, and then to try to develop and build services out in the county so that they don’t have to use the crisis services. So basically starting where we are and building a foundation so that we can avoid some of those more intense services for individuals.”

CICS also had a ribbon cutting ceremony this morning in Hancock County, and will have similar ceremonies in Wright and Webster counties on Tuesday.