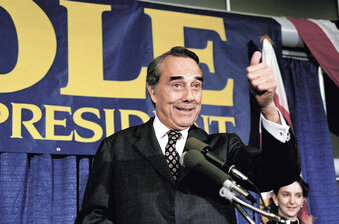 FILE - Republican presidential candidate Sen. Robert Dole R-Kan., gestures while making a speech in Washington, March 28, 1988. Bob Dole, who overcame disabling war wounds to become a sharp-tongued Senate leader from Kansas, a Republican presidential candidate and then a symbol and celebrant of his dwindling generation of World War II veterans, has died. He was 98. His wife, Elizabeth Dole, posted the announcement Sunday, Dec. 5, 2021, on Twitter. (AP Photo/Ron Edmonds, File)

DES MOINES — Former Senator Bob Dole, the winner of Iowa’s 1988 and 1996 Caucuses, has died at the age of 98. Dole, who survived nearly fatal wounds in World War II and served 35 years in the U.S. Senate, was sometimes called “Iowa’s third senator.”

“As I’ve said to some in this audience before, there’s nothing very complicated about Bob Dole,” he said in January of 1988. “I believe I have small town traditional values and Washington experience and that’s a pretty good combination.”

In both campaigns, Dole stressed his skills as a leader in the U.S. Senate.

“If I know this part of the country as I believe I do,” Dole said in Ankeny, “I’d like to think that I’d understand that the people in this state in addition to strong leadership, they’re looking at our character, our honesty, our integrity and what we’re all about.”

Senator Chuck Grassley, who endorsed Dole and campaigned with him extensively, sat beside Dole in San Diego as Dole was formally named the GOP’s presidential nominee in 1996. Grassley issued a written statement Sunday, calling Dole a “loyal friend and trusted mentor” who set a standard of selflessness that all public servants should strive to emulate. Monte Shaw, who managed Elizabeth Dole’s presidential campaign in Iowa, worked as a field organizer in southern Iowa for Dole’s 1996 caucus campaign.

“He was an authentic American hero,” Shaw said, “and he was a good man.”

Dole was honored with the 2008 World Food Prize and delivered an acceptance speech in the Iowa Capitol — promising the crowd it would be short.

“In the senate, once you’re recognized you can speak until you drop. The late Senator Thurman, I think, still holds the record as 23 hours and 20 some minutes. No one recalls what he said, but they recall that it was long,” Dole said, as the crowd laughed.

Dole ended on a more somber note, reciting a poem called “The Dash” which focuses on the dash between the dates of birth and death that are listed on a tombstone.

“So when your eulogy is being read with you life’s actions to rehash, would you be proud about the things they say about how you spent your dash?” Dole said as recited the closing stanzas and saying a brief, “Thank you,” as the crowd applauded.

Former Iowa Governor Tom Vilsack, the current U.S. ag secretary, issued a statement of condolence to the Dole family and he mentioned Dole’s sponsorship of the School Feeding Program that provides meals to children in low-income countries where food is scarce.