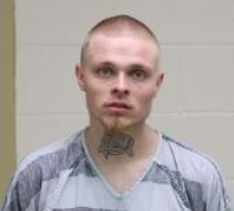 MASON CITY — One of two men arrested after a standoff with police in a downtown Mason City neighborhood back in the spring has entered into a plea agreement with prosecutors.

27-year-old Cody Dakin of Manly and 27-year-old Michael Dalluge of Ottumwa were taken into custody on May 6th. Law enforcement accused Dakin of speeding away from an attempted traffic stop west of the downtown area and then went off the road and hit a tree in the 300 block of 1st Northwest.

Authorities say Dakin and Dalluge then fled the vehicle, with Dakin barricading himself inside a house in the 200 block of 1st Northwest. A law enforcement team forced their way into the house after several hours and used pepper spray to subdue Dakin. Dalluge was taken into custody about a block north of the crash. Police stated that both men had loaded handguns and methamphetamine in their possession at the time of their arrests.

Dakin was originally charged with a Class B-level felony controlled substance violation, trafficking a stolen weapon used in a crime, eluding, and control of a firearm by a felon. Dakin this week pleaded guilty to possession of methamphetamine third offense and eluding while participating in a felony, both Class D felonies.

According to the plea agreement filed in Cerro Gordo County District Court, a joint recommendation will be made for a five-year term on each count which will be suspended, state prosecutors have reached an agreement with federal prosecutors and no additional federal charges will be filed, and Dakin would be placed in the Beje Clark Residential Facility as part of his term of probation. Dakin is scheduled to be sentenced on January 3rd.

Local-level charges against Dalluge were dismissed in August after he was indicted on federal charges as part of the same incident.