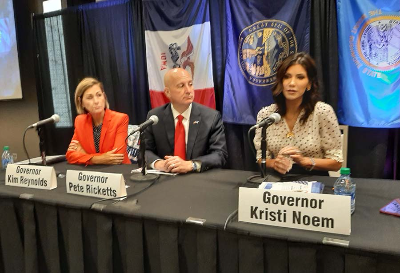 The governors met in the Sioux City metro yesterday for the 17th Tri-State Governors’ Conference and spoke to more than 200 business leaders.

Iowa Governor Kim Reynolds said businesses are adjusting to address the workforce shortage and the government must, too.

“We want to be a partner in that,” Reynolds said. “We want to help Iowans retrain, reskill, match them up with the opportunities that exist across the state.”

South Dakota Governor Kristi Noem said she, Reynolds and Nebraska’s governor were criticized for the way they dealt with the pandemic, but Noem said their approach should be a selling point to get potential workers to move into the region.

“The recruitment of workers is important outside the state to fill the needs that we have,” Noem said. “In South Dakota, tourism is our second largest industry and we’re being creative in how we fill that workforce need.”

Nebraska Governor Pete Ricketts said ending the extra federal money in unemployment checks will get more Nebraskans back in the workforce.

“Wages are driven by the market and I think employers should pay what the market is demanding to be able to employ people,” Rickett said, “but I also don’t believe that the government should be competing with employers on that.”

The Tri-State Governors’ Conference which is held every two years in the Sioux City area. One business leader told the three governors that states must act because there just aren’t enough workers, not because of the pandemic, but because older workers are retiring and there aren’t enough younger workers to fill those jobs.