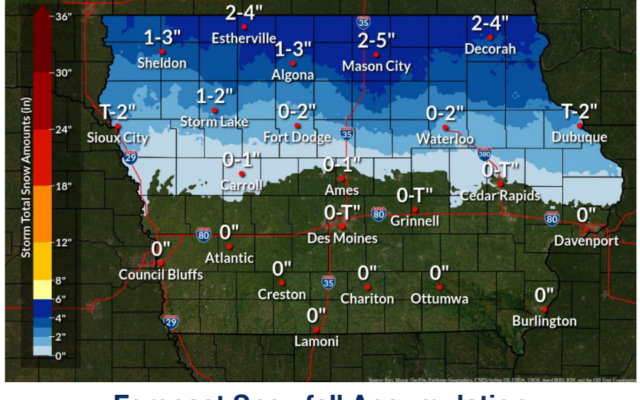 MASON CITY — Wide sections of northern Iowa are expecting snowfall this afternoon and into tomorrow, with up to five inches of snow possible in some areas along with the potential for ice.

National Weather Service meteorologist Andrew Ansorge  says much of the state’s northern half is under a Winter Weather Advisory.   Ansorge says, “It might start off initially as some rain before it goes to freezing rain and then probably just a freezing rain, snow and rain mixture into the overnight hours, before probably ending just as snow.”

While the southern half of the state will likely just see rain from this system, temperatures will be cold enough as you head toward the Minnesota border for light-to-moderate snowfall.  “Total snow amounts up there, south of Highway 20 is not going to see much more than an inch or so,” Ansorge says. “Once you get north of Highway 20, you could see two, maybe three inches of snowfall, and then on the ice side of things, we’re looking at a glaze of ice accumulation.”

The forecast for Estherville and Decorah calls for two-to-four inches of snowfall, while for Mason City, it’s two-to-five inches. The National Weather Service is predicting a relatively quiet Friday, but by the weekend, things may likely change.  “Right on the heels of this one, we have a fast-moving system coming in,” Ansorge says. “We may see that start off Saturday morning as a little bit of snow, not expecting much for accumulation before all that precipitation will change over to rain with warmer temperatures and moving in.”

Travel could become challenging later today, especially across the state’s northern half and well into the south. Temperatures are only expected to be a few degrees above freezing and a shift downward could quickly mean icy, hazardous roads.