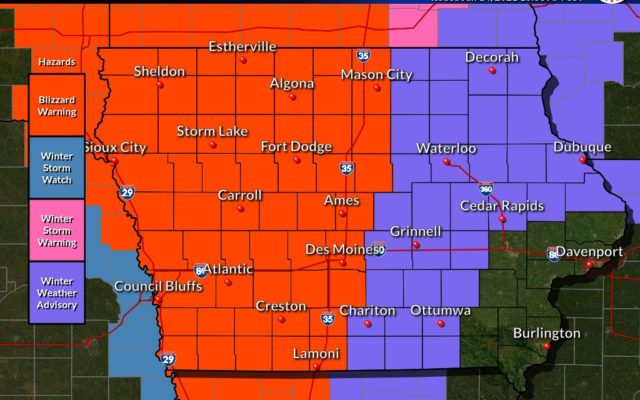 MASON CITY — Forecasters say a large winter storm system is moving toward Iowa that will likely impact travel for many of us before the weekend arrives.

Up to nine inches of snow is forecast for parts of west and central Iowa along with winds gusting up to 50 miles-an-hour. Meteorologist Cory Martin, at the National Weather Service, says it’ll get wicked late tonight and early tomorrow.

“We’re looking at snowfall increasing by late today and into the overnight hours,” Martin says. “Really, the story with this system isn’t necessarily going to be how much snow falls, it’s just that the combination of the snow with the really strong winds is going to make travel really difficult — if not impossible — in some areas, generally along and west of the Interstate 35 corridor.”

A Blizzard Warning is posted for much of the state’s western half from 6 o’clock tonight through 6 o’clock tomorrow night, including for the majority of the listening area. Snowfall could be heavy. “North-central and northwest Iowa, we’re looking at over six inches likely up there, a little less as you get south towards the Des Moines metro and into west-central and southwest Iowa,” Martin says. “Again, combined with the strong winds, you’re going to have widespread visibilities of a quarter-mile or less possible which would make travel very difficult.”

With some of the advisories and warnings taking effect at 6 p.m., the weather could start getting nasty about the time many tens of thousands of Iowans will be trying to get home for the day.

“The worst of the conditions are probably going to be overnight into tomorrow,” Martin says, “but if you do have travel plans or you need to commute later today, it’s best to check ahead before you leave and make plans accordingly.”