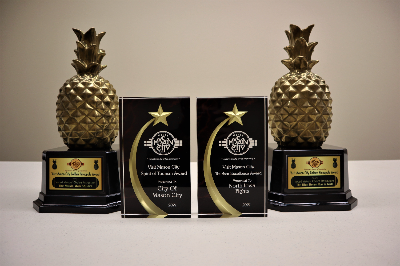 == Three of the organization’s “Golden Pineapple Awards” were given as part of voting by visitors who are asked to cast ballots inserted into the Mason City Experience Guide and collected at ballot boxes throughout the community or online at the Visit Mason City website for locations that made their visit memorable in the categories of hotel, attraction and restaurant. The Holiday Inn & Express and Suites, Music Man Square, and the Blue Heron Bar & Grill were the winners in each of those categories.

== The “Friend of Tourism Award” is presented to an individual who promotes, contributes and enthusiastically supports tourism in Mason City. Since returning in 2016, retired Navy captain and north-central Iowa native Joan Platz now resides in Mason City with her husband Tim. Joan has been actively involved with the River City Society of Historic Preservation and Wright on the Park. Platz volunteers her time and talents to numerous projects ranging from writing grants, fundraising and planning events to landscaping, painting and more.

== The “Tourism Excellence Award” is presented to an attraction or event that draws visitors to town, contributing to a significant economic impact to the Mason City tourism industry. The award was presented to North Iowa Fights and Mike Estus, who began coordinating mixed martial arts events. Those events grew from attracting 500 people for the first fights to over 2000 when they had their first event in the new Mason City Arena this past April. The North Iowa Fights events are now broadcast worldwide via pay-per-view, providing additional eyes on these events, the Mason City Arena, and the community.