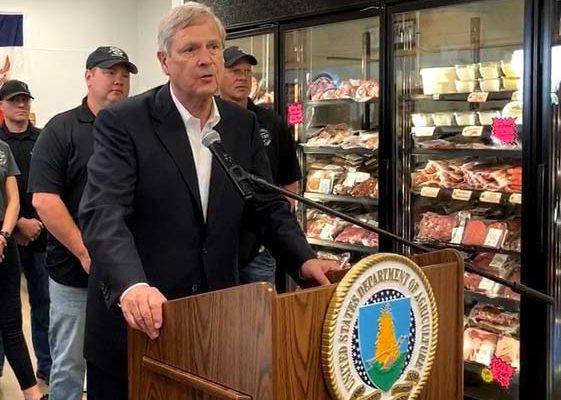 COUNCIL BLUFFS — The U.S.D.A. will spend half a billion dollars to help establish smaller-scale meat processing plants to compete with the four major corporations that dominate the industry.

U.S. Agriculture Secretary Tom Vilsack made the announcement in Council Bluffs. “It’s first and foremost going to create an opportunity to reverse what’s happening today out in the countryside where producers are having to sell their cattle at a loss, only to learn that processors end up taking that cattle and generating a profit,” Vilsack said. “It seems to me, in fairness, the profit ought to go both ways.”

Vilsack said spurring the development of more meat processing facilities addresses some of the supply chain issues that cropped up as large pork, beef, and poultry processing plants shut down early in the pandemic. In addition, Vilsack said smaller plants, closer to where animals are raised, give farmers more options for selling their livestock.

“It’s going to allow us to have greater price discovery because now we’ll have more markets to have information from,” Vilsack said, “so we’ll get a true sense of what the market is.”

Vilsack is also committing $100 million dollars in U.S.D.A. funds for existing meat processing facilities with fewer than 500 employees, to reduce the meat inspection fees. In addition, President Biden has signed an executive order calling for action on consolidation that not only limits where farmers can sell commodities, but has shrunk the number of companies selling things like seed and fertilizer.

“With the president’s executive order, we can move the bureaucracy more quickly because they understand that it’s not just secretarial priority, it’s not just a Cattlemen’s priority,” Vilsack said, “and in Washington, that makes a difference.”

Vilsack told reporters during a news conference Friday in Council Bluffs that the goal is to draw a bright line and define what constitutes unfair competition in the agricultural sector.

“Making the burden of proving a violation a little bit more producer balanced than it is today,” Vilsack said. “When you say to prove a violation, you have to prove that the entire industry has been impacted, well, that’s virtually an impossible standard to meet, ok? So what we’re going to do is say, ‘That’s not the standard, should not be the standard,’ to give producers a fair shake.”

In a written statement, Republican Senator Chuck Grassley said he’s glad the Biden Administration is “beefing up enforcement” of the Packers and Stockyards Act and he applauded Vilsack’s effort “to make markets competitive for all Americans.” Iowa Agriculture Secretary Mike Naig said while much remains unclear, he’s “optimistic” about the Biden Administration’s efforts to address anti-competitive practices in agriculture.