US Supreme Court clears way for execution of federal prisoners, including Honken 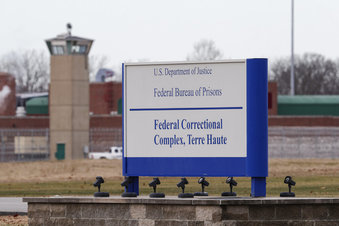 FILE - In this Dec. 10, 2019, file photo the guard tower flanks the sign at the entrance to the U.S. Penitentiary in Terre Haute, Ind. The Justice Department plans to resume federal executions next week for the first time in more than 15 years, despite the coronavirus pandemic raging both inside and outside prisons and stagnating national support for the death penalty. Three people are slated to die by lethal injection in one week beginning Monday. The executions will take place at USP Terre Haute. (AP Photo/Michael Conroy, File)

TERRE HAUTE, Ind. (AP) — The Trump administration was moving ahead early today with the execution of the first federal prison inmate in 17 years after a divided Supreme Court reversed lower courts and ruled federal executions could proceed.

A federal appeals court in Washington refused the administration’s plea to step in, before the Supreme Court acted by a 5-4 vote.

Still, Lee’s lawyers said the execution could not go forward after midnight under federal regulations.

North-central Iowa drug kingpin Dustin Honken, who was convicted of killing five people in 1993, is scheduled to be executed on Friday.