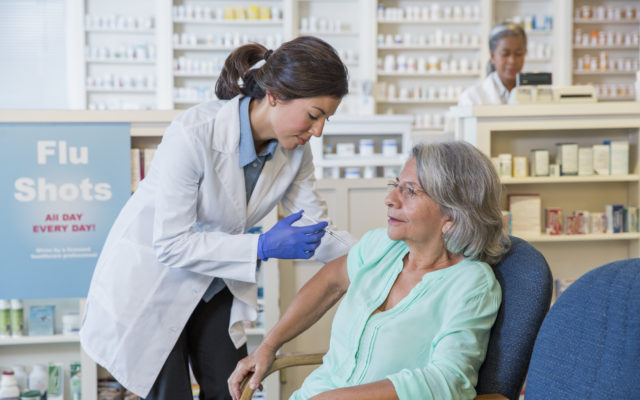 IOWA CITY — The chief medical officer for the University of Iowa Hospitals and Clinics is warning everyone to not be complacent about getting a flu shot.

Doctor Theresa Brennan says the UIHC diagnosed more than 150 cases of the flu last week. “I can tell you that this is early — in general we wouldn’t start to see these numbers until into December,” Brennan says. “So it is early. And when we see early spread, we worry that it’s going to be higher spread.”

The symptoms of the flu can be similar to COVID-19, but Brennan doesn’t think people coming in to get test for COVID is the reason they’ve discovered more flu cases. “Most of the people that we’re seeing that are positive (for flu) — the vast majority are very symptomatic. And so, those people likely would have gotten tested in another (flu) season. So, I don’t think it is test bias,” according to Brennan.

Brennan says higher flu rates added to the state’s high number of COVID hospitalizations will further strain the health care system.  Brennan says everyone should also know there are big differences between the COVID and flu vaccines. “Influenza vaccine has been around for a long, long time. Lots of people have gotten it. One of the concerns with the COVID vaccine is unknown side affects and overall safety.   We know what the overall safety of the influenza vaccine is — and so people shouldn’t confuse any concerns they’ve had with the COVID vaccine with a tried and true influenza vaccine that we’ve had for years and years,” she says.

Brennan says it takes two to three weeks for the flu vaccine to become fully effective.  She has this recommendation for those attending family gatherings for Thanksgiving. “Do everything you can to keep it safe. I know everyone wants to see their family and friends — it has been a long, long time,” Brennan says. “But we also want to be sure people are around next year to do the same.”

She says to follow the same advice they’ve given for years with the flu — wash your hands, stay away from others if you have symptoms, and get vaccinated.