DES MOINES — More than 425,000 Iowa Medicaid patients will have to sign up with a new “managed care organization” now that the state and United Healthcare are ending their business deal. However, it’s unclear if there’s a deadline for patients to make that switch.

“I don’t know that we know that or that we’re even necessarily in agreement on that. There isn’t just a set day,” Iowa Department of Human Services director Jerry Foxhoven said during a news conference late Monday afternoon.

“This is just chaos. I mean, there is just no other way of saying it,” said Senator Amanda Ragan, a Democrat from Mason City who is a long-time critic of having private companies manage the state’s Medicaid program. “And if you’re an individual sitting out there who has three or four different providers, you’re going to be even more confused now because you don’t know who to go to.”

Foxhoven said he’s confident the two other private companies the state has contracts with have “the bandwidth” to accept United Healthcare patients.

“United will have to create a transition plan,” Foxhoven said. “We will have to approve it and it’ll have to protect all the Iowans that are on Medicaid before it will get our approval and we do have financial leverage over them as well.” 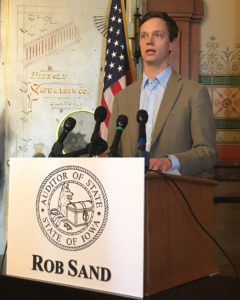 State Auditor Rob Sand said he’s read over the United Healthcare contract with the state and it calls for hiring a liaison that Iowans may contact with complaints during the transition.

“You’ve got hundreds of thousands of Iowans now who have been trying to get accustomed to United (Healthcare) who now don’t know what’s going on with their health care going forward,” Sand said during a news conference Monday afternoon.

United Healthcare executives say the company has lost a quarter of a billion dollars in Iowa and had to sever its contract to manage Iowa Medicaid patients’ care because the state has underfunded the programs. Governor Reynolds has said the company wanted to be paid without meeting performance goals – like paying health care providers on time.