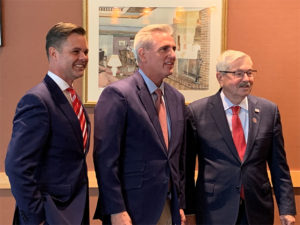 “I encouraged him to run two years ago. At the time, it wasn’t right for him, but now it the right time,” McCarthy said. “…When I look at the challenges that we have before this nation, I just understand that Iowans want to see a change.”

Nunn, who has served in the U.S. Air Force and the Iowa National Guard, has been a vocal supporter of Ukraine. The Biden Administration’s decision this week to send surface-to-air missiles to Ukraine should have happened long ago, according to Nunn.

“Going forward, we need to have a strategy to be able to deter the Russians and help the Ukrainians, but handing over just…billions of dollars with no plan is not a plan for success,” Nunn said

A few Republican candidates have begun calling for an end to U.S. aid to Ukraine. McCarthy indicated that if Republicans gain a majority in the U.S. House, they’ll push the Biden Administration for a plan to “end the war.”

McCarthy also blasted the idea of cancelling U.S. arm sales to Saudi Arabia, as some Democrats have proposed. McCarthy said it would harm relationships with allies if America fails to fulfill its promises.

Both McCarthy and Nunn agreed that after the U.S. Supreme Court overturned Roe v Wade, decisions about abortion policy should be made at the state, not federal level. Nunn already has voted for some abortion restrictions in Iowa as a member of the state legislature.

“I think the court’s been very clear here under the 10th amendment, this is back to the states,” Nunn said. “…Not only the states have the responsibility to do…we really this needs to be a conversation with Iowans and we need to afford them the opportunity to have their voice heard.”

McCarthy and Nunn made their comments during an interview with Radio Iowa before a campaign fundraiser in West Des Moines. Nunn is challenging Democratic Congresswoman Cindy Axne’s bid for a third term in the U.S. House.