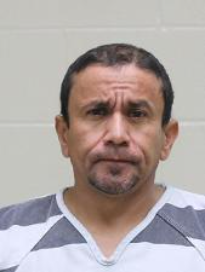 MASON CITY — Authorities say a traffic stop has resulted in a methamphetamine bust with more than 100 pounds of the drug being located.

The Iowa State Patrol made the stop on Tuesday near the 188 mile marker on Interstate 35 near Clear Lake as part of a level three commercial vehicle inspection due to an oversized load. Authorities say the vehicle was taken to a Department of Transportation shed in Mason City where the contents of the vehicle were unloaded, where they allegedly found four duffel bags containing a total of about 100 pound of meth.

Arrested were 51-year-old Juan Ruiz Garcia of Pleasant Prairie, Wisconsin and 33-year-old Jamie Hurtado of Waukegan, Illinois. Both men have been charged with possession with the intent to deliver or manufacture meth over five kilograms and failure to affix a drug tax stamp.

Hurtado also faces a charge of possession of a controlled substance and is being held in the Cerro Gordo County Jail on $6000 bond. Garcia is being held on $5000 bond.