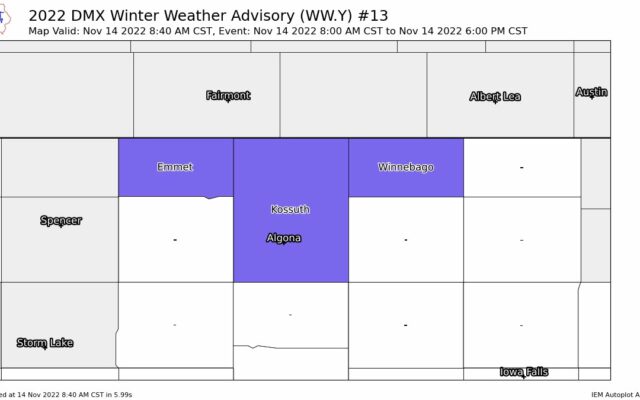 FOREST CITY — There’s still more than a month of fall left but winter weather is moving into Iowa today. It’s snowing in parts of north-central and northwest Iowa, with a Winter Weather Advisory in effect until 6 o’clock tonight for Winnebago and Kossuth counties.

National Weather Service meteorologist Craig Cogil says the snow will continue well into the afternoon.  “Right now, it looks like the accumulations are mostly going to be in the about the top three tiers or so of Iowa,” Cogil says, “the heaviest right along the border where maybe up to two to three inches of snow are expected today.”

A second snow storm is forecast to move into Iowa from the south late tonight and move across central Iowa, heading east. “And that snow is going to last on and off until late Tuesday night/early Wednesday,” Cogil says, “and anywhere from one to three inches looks pretty widespread across the eastern two-thirds of the state.”

Even though winter doesn’t start until December 21st, Cogil says this second round of snowfall is relatively on target, roughly ten days early.  “Typically, I know in the Des Moines area, right around November 25th is the average date of the first inch of snow, so you go north, it’s going to be sooner than that, you head south a little bit later,” Cogil says, “but so it’s not too far off the mark for it really.”

Snow that accumulates will likely be sticking around for several days as he says air temperatures are expected to stay quite cold, and there may not be a warming trend at least until next week.