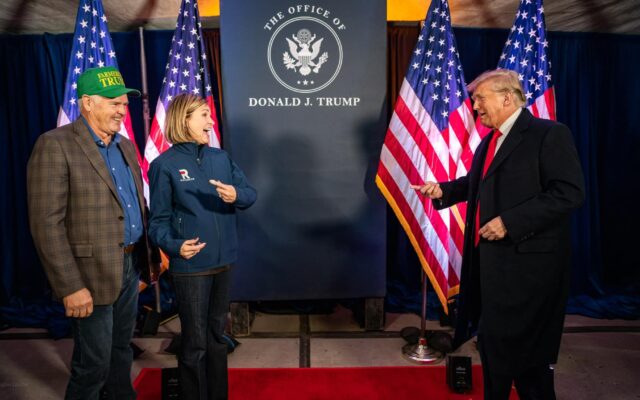 SIOUX CITY — Former President Donald Trump has used an appearance in Sioux City to tout two Iowa Republicans who are seeking reelection this year and to hint that he will run again for president in 2024.

Trump called Senator Chuck Grassley courageous and Kim Reynolds a great governor. “So everybody get out and vote for Kim and vote for Chuck,” Trump said. “These are two incredible people and I know they’re going to have a big Tuesday. We really know that anyway, but I wanted to come up here just in case. We don’t want to take any chances.”

Trump invited Grassley on stage, too. “Thank you for coming because you want to get this vote so we can turn around the bad policies of this administration,” Grassley said.

As Trump’s plane landed in Sioux City, Mike Franken — Grassley’s Democratic opponent — was rallying with a crowd in Des Moines.

“The era of what’s happening in Sioux City is over,” Franken said, to applause.

Franken described his campaign’s gathering as “second fiddle” to Trump’s, but Franken suggested Trump and Grassley no longer appeal to a winning majority of Iowa voters.

“The difference between the two campaigns, frankly, is we bring together. We don’t divide,” Franken said. “You can’t win with 45% of the vote in this state.”

Democratic candidate for governor Deidre DeJear accused  Reynolds and Trump of being focused on “dangerous rhetoric” rather than solutions to problems.

DeJear made her comments while campaigning Thursday night in Indianola.