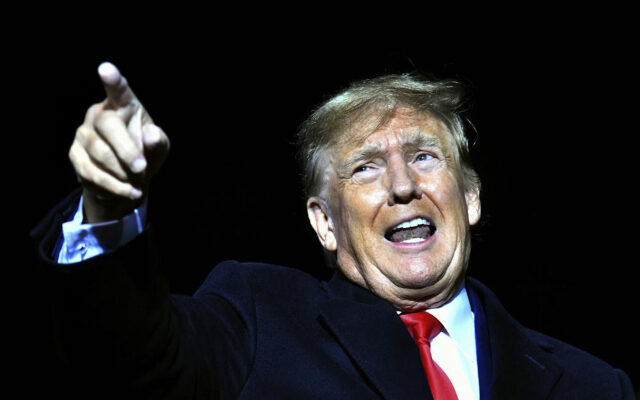 Trump’s political action committee says the event is meant to boost two candidates that Trump previously endorsed — Senator Chuck Grassley and Governor Kim Reynolds.   “We’re excited to have him back in the state,” Reynolds said last week during a campaign stop in Sioux City. “We’re excited to continue to energize Republicans to continue to get out and vote.”

The rally site is in Iowa’s fourth congressional district, where Republican voters outnumber Democrats by 95,000. University of Iowa political science professor Tim Hagle says during a midterm election — when there’s no presidential race on the ballot — both political parties have to find ways to maximize turnout among their voters. “One of the other things that we know about Trump voters in Iowa is that a lot of them were independents,” Hagle says. “They often even have a bigger drop in turnout in a midterm election, so it may be a way to energize those folks.”

Trump will join a long list of potential 2024 presidential candidates who’ve campaigned here for Iowa Republicans on the 2022 ballot.  “There have been hints — fairly strong ones — that he’s going to run at some point, but other people are thinking that he’s not going to, so who knows,” Hagle says. “At the very least, Trump being Trump, he likes stay in the conversation and so showing up in Iowa….certainly helps him to do so.”

Iowa Democratic Party chairman Ross Wilburn says Grassley and Reynolds will be standing with a traitor who wanted to overthrow our government and continues to support attacks on our democracy.

Trump’s rally will be held at the Sioux City airport and some people camped out overnight to be ready when the parking lot opens at 8 a.m. Tickets are required for entry into the venue and doors will open at 2 p.m.