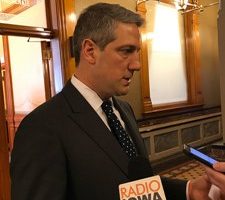 DES MOINES — An Ohio congressman who’s the latest entrant in the Democratic Party’s crowded presidential field says there are big problems to solve in the country and it’s time to “recreate and re-establish the middle class.”

Tim Ryan represents northeast Ohio and the cities of Akron and Youngstown in the U.S. House. Ryan, who is 45 years old, gained national attention after Trump’s 2016 election when he argued his party needed a new message and he tried to replace Nancy Pelosi as the top Democrat in the U.S. House.

“I’m tired of waiting around. I don’t want to explain to anybody else what the real concerns are for people who come from places like where I come from,” Ryan said. “And I’ve been doing this long enough that I think I have the ideas and the vision for what America can be and I have the ability to bring everybody together.”

Ryan participated in the Heartland Forum in Storm Lake at the end of March. He formally launched his presidential bid on April 4 and he’s been campaigning in central Iowa the past two days. Ryan said this afternoon that voters are seeking substance over “sloganeering.”

Ryan said Democrats need to give Trump voters a reason to vote for a Democrat again.

“I think it would be helpful for us to say: ‘Why did they vote for Trump?’ They voted for Obama twice, so I think it’s intellectually lazy to say: ‘Everyone’s a racist,’” Ryan said. “There are people who were hurting and hurting economically and haven’t had a raise since 1980 and Democrats didn’t answer that call.”

Ryan, who is an attorney, was 29 when he won his first race for congress and the youngest member of the U.S. House when he was sworn into office. In 2018, Ryan easily won reelection in his Ohio congressional district by 22 points.