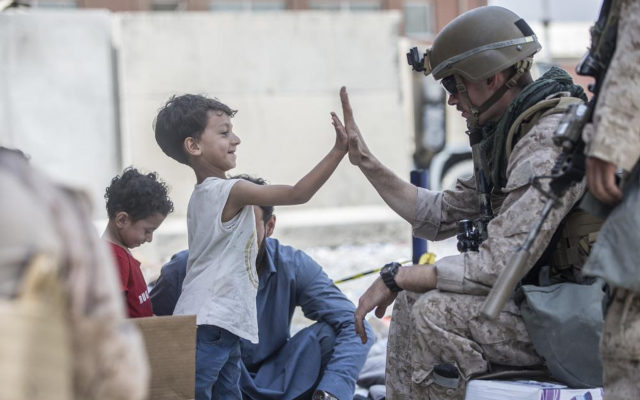 DES MOINES — A coalition of agencies and organizations is preparing to help as many as 1300 Afghans resettle in central Iowa by the middle of next year.

Mak Suceska is head of the Iowa Bureau of Refugee Services, the state agency that’s providing technical assistance to organizations sponsoring Afghans evacuated from their home country this summer.

“The situation is ever changing and ever fluid with respect to numbers and when folks will be arriving. We currently have families and individuals that have been resettled today and will continue to arrive,” he says.

Iowa officials working on the resettlement process get a couple of weeks notice that a group of Afghans will be flying into the Des Moines Airport.

“Refugees don’t just show up. They are resettled through resettlement organizations and through a process of travel and assurance before they are set to arrive in their respective community,” Suceska says.

Kerri True-Funk, director of the U.S. Committee for Refugee and Immigrants in Des Moines, says the Afghans who were evacuated in August were fleeing persecution and violence, often because of their work with or support of the U.S. military over the past 20 years.

“One of the things that we have to remember about the people who have been evacuated from Afghanistan is that they may have never lived in a country that was not actively at war,” she says. “From the Soviet invasion in the 1970s up until now, there has been constant conflict and the government has moved back and forth and at different times has been authoritarian and democratically elected.”

The tens of thousands of Afghans flown to airports overseas underwent initial screenings there to determine if they were eligible for resettlement, then once they arrived at eight different military installations in the United States, there were more extensive medical checks.

“The people that were evacuated and processed received two-year humanitarian parole. The clock on that started when they actually had their passport stamped and came into the U.S..” she says. “One year after they have been here they must apply for asylum in order to stay legally in the U.S. and continue to work and they are all authorized to work while here.”

Once the Afghans arrive in Iowa, they’ll get financial support and assistance from government agencies and private organizations for three months.

“They’re coming to a country without Social Security numbers, without work authorizations. Many of them don’t speak English and so they need their kids registered for school, they need places to live, they need help accessing health care — and that’s really what those first 90 days are for,” True-Funk says.

Most of the Afghans who were flown out of their country in August were living in cities like Kabul, which has a population of more than four million and Kandahar, which is about the same size as Des Moines. True-Funk says there are no restriction on where the Afghan evacuees may live here and many are likely to choose to stay close to urban areas, but some may relocate to rural America.

“Afghanistan has a very strong agriculture and farming culture and Afghan people are very used to owning their own homes and having their own gardens,” True-Funk says, “and so we may see over time as they get more adjusted — working more, speaking more English — populations moving outside of the city centers.”

A handful of Afghans had resettled in Cedar Rapids by the end of October. In mid-November, an agency leading the resettlement process in Cedar Rapids indicated about 115 more are likely to arrive by next fall.