Time to be ‘bold about the basics,’ gubernatorial candidate Ras Smith says 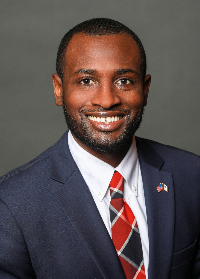 WATERLOO — Democrat Ras Smith kicked off his campaign for governor with an online video Tuesday morning and an in-person rally in his hometown of Waterloo early Tuesday evening.

“I believe that together we can accomplish so much more…and that means starting by being bold about the basics,” Smith said. “You see Iowa can once again have the best schools in the nation.”

Smith’s mother, the pastor at the Faith Temple American Baptist Church in Waterloo, started the rally with an invocation.

“Bless this marvelous city of Waterloo, Iowa, that we might be a beacon of hope for this nation that needs to see that you are working in us to make this a more perfect union,” she prayed.

A CeeLo Green song with gospel undertones played as Smith walked on stage and Smith began his speech with a story about an Easter Sunday experience. “And so today, I’m inviting you to be a part of this campaign, to be a part of this movement and to come as you are,” Smith said, to cheers.

Smith, who is 33, has served in the Iowa House since 2017, and is seeking to be the first black Iowan to be elected to statewide office. Smith said the state’s civil rights heritage can be its path forward.

“Iowa desegregated schools before the federal government,” he said, to cheers. “We developed agriculture that feeds the globe, recognized the love is love before any other Midwestern state.”

Smith is the first Democrat to officially enter his party’s race to challenge Republican Governor Kim Reynolds’ bid for reelection in 2022. Smith criticized her signature on a bill that bans teaching that the United States is systemically racist or sexist.

“We all know that something’s not right. Our government and political systems are sick,” Smith said. “…Our leaders are using their words and policy to tell you that you don’t belong here, that your black life doesn’t matter.”

A statement from the Republican Governors Association accused Smith of being a “tax and spend liberal” and described Reynolds as a “battle tested” leader.