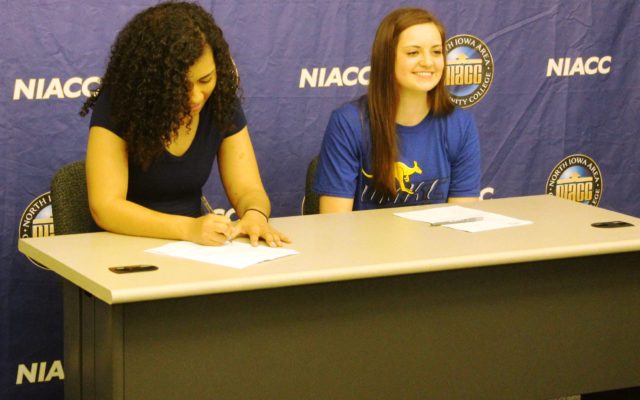 MASON CITY — Two NIACC basketball players signed national letters of intent on Wednesday to continue their careers. Mandy Willems signed with the University of Missouri at Kansas City, while Tahya Campbell signed with the University of West Georgia. Willems this past season became the fourth NIACC women’s player to earn first-team All-American honors. She says she might be able to make an impact right away for the Kangaroos.

Willems says after looking at a number of schools she decided to stay in the Midwest.

Campbell says West Georgia seemed to be the perfect fit for her.

Ciochetto says it was great to see Willems advance to a four-year school after thinking she wouldn’t play in college.

MINNEAPOLIS (AP) — Nelson Cruz had two hits and two RBIs for Minnesota, helping Jake Odorizzi and the Twins beat the Toronto Blue Jays 4-1 following a 54-minute rain delay. Off to a solid start in his first season with Minnesota, the 38-year-old Cruz had an RBI single in the first inning and an RBI double in the third. After walking in the fifth, he scored on a single by Marwin Gonzalez. Cruz twice drove in Jorge Polanco, who had two hits and is batting .429.

IOWA CITY — Popularized by the movie “Moneyball” analytics has made its way to college baseball. Rick Heller is credited with bringing analytics to the Big Ten after taking the Iowa job in 2013. He says at the college level it is used for player development and includes the study of pitch designs, launch angles for hitters and even vision training.

Heller has an army of student managers run the analytics and several have found jobs in professional baseball.

Heller says the downside is he has lost several assistants to Major League clubs including two before the start of this season.

Heller says more and more college coaches are getting hired by Major League clubs because of analytics.

Iowa faces Nebraska in a three-game series starting on Friday at Banks Field in Iowa City.

IOWA CITY — Long considered one of the weakest position groups on the team the Iowa Hawkeyes are expecting more big plays from the wide receivers next season. Two of the top three wide outs return in juniors Brandon Smith and Ihmir Smith-Marsette. Receivers coach Kelton Copeland says redshirt freshmen Tyrone Tracy and Nico Ragaini have stood out in spring drills.

Copeland says Tracy and Ragaini are motivated to make an impact.

Tracy will give the Hawkeyes a big play threat they have been lacking for years.

Copeland says the added depth at receiver may allow the Hawkeyes to go with more three wide looks to help offset the loss of standout tight ends Noah Fant and T. J. Hockenson.

Iowa’s top returning tight end is Nate Wieting. Known more for his blocking the senior had two catches a year ago.

MINNEAPOLIS (AP) — A San Francisco man is accused of bilking the Minnesota Vikings out of about $70,000 in a luxury suite scam. The Hennepin County Attorney’s Office says 39-year-old Daniel Escamilla signed a contract to rent a suite for the Sept. 9 game against the San Francisco 49ers, which he attended. When his check for $37,000 bounced a few days later, Escamilla told the Vikings he would send checks for that game as well as for a Sept. 23 game against the Buffalo Bills. Those checks also bounced.