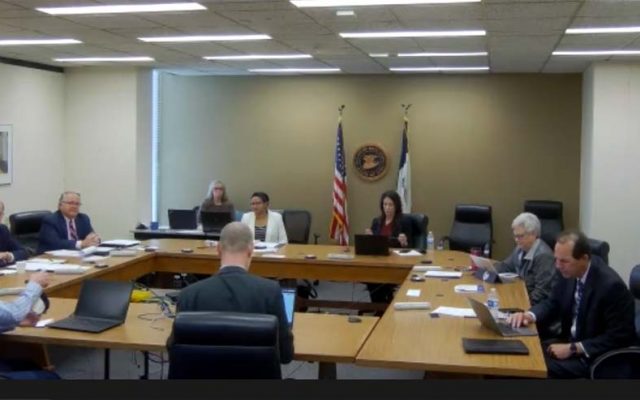 The State Board of Education

DES MOINES — The impact of online learning on the achievement gap between minority and low-income students in Iowa schools is not yet known — but answers should be coming as students are in the midst of tests right now.

The Department of Education’s Jay Pennington tells the Board of Education that Iowa should be in a good position compared to other states. “I would think that as a state that was more in-person that will help us as a state a whole in decreasing loss relative to others,” Pennington says.

Pennington cited one study which looked at how far behind students were based on the availability of online instruction. “Even with the highest quality, they were estimating three to four months behind what they would expect of students that were in-person in a normal year,” Pennington says. “And low quality — it was more like a year behind.”

National assessments were canceled in 2020 because of the pandemic. Pennigton says this year’s results will show how the pandemic learning here compared to other states. “For the most — and particularly in rural Iowa — it’s been almost exclusively in-person. What will that mean to Iowa’s numbers? We’ll find out soon. Spring assessments are underway and we’ll have data over the summer to be able to take a look at,” according to Pennington.

Pennington speculated on what the testing may show. “Here’s my hypothesis. I would guess that the impact will likely be based on enrollment patterns, the areas that were in-person versus not in-person,” Pennington says. Pennington says the information from the national tests will go along with other data to give a full picture of the impact of the pandemic on learning and where Iowa students stand.