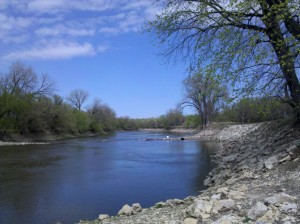 IOWA CITY — Researchers have found the toxic substances known as “forever chemicals” in some of Iowa’s remote streams, suggesting the contaminants are spreading far beyond sites typically known to use them.

The class of chemicals called PFAS have been used in household and industrial products for decades and are linked to a slate of health issues. Researchers at the U.S. Geological Survey and the University of Iowa detected PFAS in one-third of the Iowa streams they tested.

The UI’s Dave Cwiertny worked on the study.  “I think it indicates that there are likely sources that we’re not probably thinking about correctly,” Cwiertny says. “That there are ways these things can reach parts of the environment that don’t necessarily, aren’t tied to the ones you read about in the news like an airport or a military base.”

Cwiertny says he’s especially worried about Iowans who rely on private wells, which are much more vulnerable to contamination. He says the findings also raise concerns for people who eat fish from the state’s streams.

Dana Kolpin with the USGS says finding PFAS, even at low levels, is concerning because they bioaccumulate and don’t break down.  “It may not mean something today, but if you keep ingesting it and keep building it up, it may mean something to you five years from now, 30 years from now. That’s the question mark, we don’t know,” Kolpin says. “So if a compound bioaccumulates, at least to me means we should be concerned enough at least to start looking at it.”

The highest levels the researchers found were downstream from a wastewater treatment plant, which they say is valuable data for state regulators.