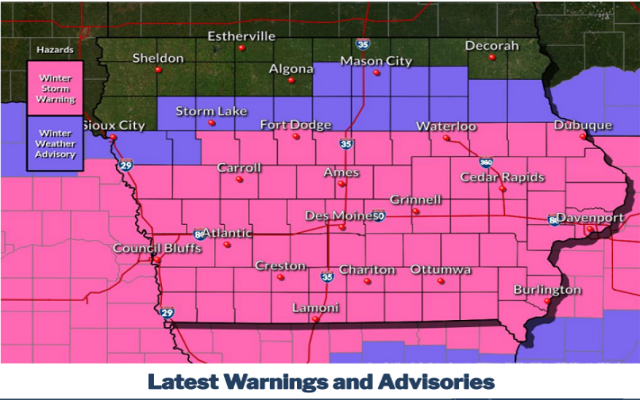 JOHNSTON — Experts say the approaching snowstorm has the potential to be the worst to hit Iowa in nearly a decade and forecasters say we need to prepare for very heavy snowfall.

Meteorologist Rod Donavon, at the National Weather Service, says a Winter Storm Warning is posted for the southern two-thirds of the state today and into tomorrow morning, adding, the snow may fall at the rate of two inches per hour.

“Expect conditions to quickly deteriorate. Overall snowfall amounts are forecast anywhere from eight to 13 inches across a large portion of central and southern Iowa,” Donavon says. ”

It will taper off towards the Highway 20 corridor where we could have anywhere from four to seven inches, and much lighter amounts to the north of that.” Iowa’s most populous city could get the worst of the snowfall, as the forecast for Des Moines calls for up to nine inches of snow this afternoon and up to seven more inches tonight. That’s the potential for 16 inches of snow.

“We’re right in line where that heavier snow band will be developing across the I-80 corridor,” Donavon says. “We’re expecting more, lighter amounts to continue into Tuesday which will add on to those totals.”

Iowans who have to drive are advised to consult the Iowa DOT’s Traveler Information website, 511ia.org, before heading out, and be flexible as you may need to stay in since snow plows might not be able to keep up with this heavy snow.

“Travel is going to be quite difficult to near-impossible at times as we have those heavier snowfall rates,” Donavon says. “In addition, we are expecting a fair amount of blowing and drifting snow as we have northeast winds, increase to 15 to 25 miles-an-hour, gusting over 30 at times.”

A Winter Weather Advisory  is in effect from tonight through tomorrow morning for Cerro Gordo, Hancock, Wright, Franklin, Butler and Floyd counties where we could see two to five inches of snow.