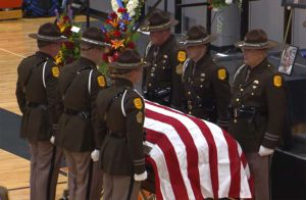 WAUKON — Hundreds of law officers filled the Waukon gymnasium Wednesday to say goodbye to State Trooper Ted Benda who died earlier this month after being in an accident on the way to a call.

Iowa Public Safety Commissioner Stephen Bayens gave the eulogy. “We’re saddened, but we are not robbed of joy, this is how we find ourselves today as we both mourn the loss of Trooper Ted Benda — while also celebrating his life and service. Our hearts are certainly heavy laden — but our spirit remains strong as we carry forward his memory and his legacy,” Bayens says.

Benda was 37 and leaves behind a wife and four daughters. Bayens says he has a lot in common with Benda’s daughters. “I grew up like most cop kids do — taking for granted that my dad would show up at the end of his shift. As a child, the prospect that anything else would ever happen never crossed my mind,” Bayens says. “My dad like Ted 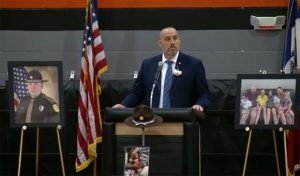 was consistent, steady and strong. My mom, like Ted’s wife Holly knew better, for only they understood the weight and scars their husbands carried.”

He says it took him many years to understand why his dad would risk his life for others — and says it was for his family and a sacrificial love for them. “In law enforcement, we are quick to focus on our oath to protect and serve. But when it came to Ted, it was his other vows that truly defined the man,” he says, “his vow to love and cherish his wife Holly. His vow to be a caring and doting dad to his girls. His vow to be a good son, a good brother, a good friend. Underpinning every single one of those vows was a sacrificial love,” Bayens says.

Bayens says Benda loved his community and in a final act gave back to others. “Even in death, Ted’s impact was undeniable. Last week on a gray morning in LaCrosse, Wisconsin, Ted’s family, friends, and coworkers had a chance to honor his final gift to the world as he donated his organs to those in need,” he says.

Bayens ended up with this message to Benda’s family. “To Holly and the girls, thank you for sharing your husband and your dad with us. He could not have served the people of Iowa without your steadfast support. His sacrifices were your sacrifices,” Bayens says, “and we will be forever grateful for his service to the Iowa State Patrol and to the State of Iowa.”

The funeral ended with the traditional end of watch call from the dispatcher using Benda’s 313 badge number. (listen here)

Benda started his career in 2005 with the Division of Criminal Investigation in Marquette before transferring in 2016 to the Iowa State Patrol, serving out of Mason City and later Post 10 in Oelwein.