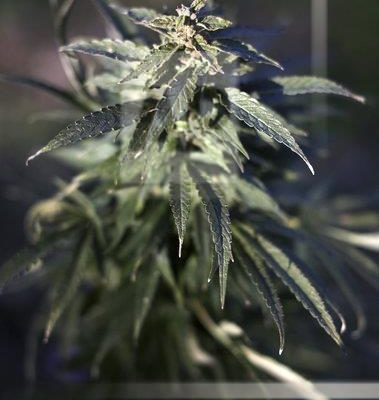 In this Tuesday, Oct. 23, 2018 photo, an industrial hemp plant grown for research is seen at the Michael Fields Agricultural Institute in East Troy, Wis. (Anthony Wahl/The Janesville Gazette via AP)

The governor’s signing of the bill that makes industrial hemp production legal has put the process in motion to create the rules for producers. Iowa Agriculture Secretary Mike Naig says the 2018 federal farm bill opened the way, and the state now has to follow through.

“We will apply to the U-S-D-A and seek approval from them to have a state program,” Naig explains. “So, there is quite a bit of work yet to do here before we actually have a program to implement here in the state.” He says that means there won’t be any hemp grown on Iowa farms until 2020. That gives producers time to research hemp as a possible crop.

“We’re encouraging folks to take the time. We’ve got a year now to look at everything from the agronomic things that you need to look at — from a seed selection and tillage and land and all those types of things — all the way across to what are the markets for the product. Are you growing industrial hemp for
for C-B-D production or for fiber of for grain and oil production.” He says it is the same process you should use for any new crop.

“We really encourage folks to take the time and understand and learn and then be ready to take the field in 2020 is that is viable for them,” Naig says.
Naig says there could be some crossover in the equipment used for traditional crops and the planting of industrial hemp.

“From a seeding standpoint we understand, and I think some the traditional planting equipment probably works,” according to Naig. “And then really on the harvest side, it so much depends on what the end use is.” He says you might need different equipment to harvest the hemp for oil than you do for harvesting it for fiber. Those who pushed for legalizing industrial hemp say it has a variety of uses from fabric to oils, paper and rope that could benefit farmers. Naig says you have to research if growing hemp is viable for your operation.

“I’ve said many times I am confident that we can grow industrial hemp in the state of Iowa. We used to and we’re good at growing nearly anything,” Naig says. “It’s really a question in my mind of whether or not folks have a viable market for that product. And that’s really what we should be looking at from an economic standpoint.” Naig says industrial hemp has the potential to be grown anywhere in Iowa.

“The legislature did cap the amount of acres that a producer can grow to 40 acres — so we’re not talking about whole sections of farmland here that would be going into farm production,” Naig explains. “Forty-acre tracts or smaller tracts of land — I think we’ve seen that in some other states like Kentucky where they’ve really been ahead here on industrial hemp production. I think it can be applied anywhere — but again — economics will really drive that.” Farmers cannot legally grow hemp in Iowa until the U-S-D-A approves the proposed regulatory plan Naig’s department is working up. The law l does not legalize the recreational use of marijuana, and requires the hemp plants to have T-H-C levels of point three (0.3) percent or less. Plants with T-H-C levels above that percentage are still considered controlled substances in the state and must be destroyed.