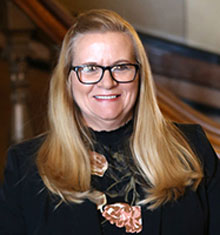 “We have some ventilators on order,” Flinn says. “I believe it’s a very small number because they’re very hard to find.”

State officials are encouraging hospitals to use plans from the Centers for Disease Control and convert anesthesia machines into ventilators. Early last week, government officials indicated the number of ventilators in the state was confidential information because they’re part of emergency plans.

On Wednesday, officials released those numbers, along with an estimate that there are enough doctors, nurses and other caregivers employed today to hospitalize about 9000 people in Iowa. Flinn says data on the number of face masks, gloves and other personal protective equipment currently available in Iowa is a constantly changing number.

Purchases are being made by the state as well as individual hospitals around the state, according to Flinn. Iowa National Guard soldiers delivered protective equipment for medical staff to more than 20 county distribution sites around the state on Wednesday.