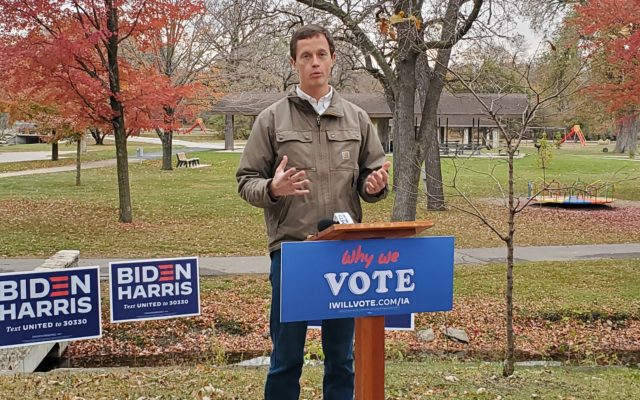 Sand tells KGLO News that it’s part of his tour of all 99 counties each year.  “This is part of my annual 100 county seat tour — Lee County actually has two counties seats, so we make an extra stop. It’s an important part of democracy, making sure that people have a chance to talk to their elected officials. I’m not scared to answer questions from anybody. Some folks sort of set these events up but don’t take questions, or it’s not a public event. We want people to come out and talk about whatever they want to hear about, and I think that’s the heart of what we’re all trying to do here together in a democracy.”

Sand says at his tour events that it’s not uncommon to have people wonder what all the State Auditor’s office does with their investigations.   “There’s a decent number of folks out there who hear the State Auditor’s office did this, they did that, but they don’t get a lot of the details of what really specifically we do. There’s a little bit of overlap and expectations between what we do and what the Attorney General’s office does. I’m a full-time public employee, and I think talking to folks about what it is exactly that we do and helping them understand, because they have their own full-time jobs, helping them understand the differences and what it is we’re supposed to be doing and why is a good thing for everyone.”

Sand says as State Auditor and previous to that when he was helping to prosecute cases of public misconduct for the Iowa Attorney General’s office, the number of public misconduct cases has risen over the last 15 years. He says some cases are simple mistakes made by a public official, while others deal with attempts at corruption.  “It’s a combination that varies for each investigation. Some folks know what they’re supposed to do and choose to do it differently. Others it’s more of a corrective report, kind of an FYI that this isn’t the correct way to do it. At the end of the day, it’s not just us out there. If there’s a case where theft is involved, or fraud involved, we can make a referral, and in typically that case you see the county attorney or the Attorney General’s office get involved for criminal charges at the same time.”