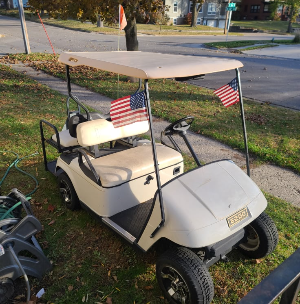 CLEAR LAKE — Some members of the Clear Lake City Council are expressing concerns about the city’s allowance of golf carts to be used on city streets.

Carts are allowed on most city streets with a posted speed limit of less than 35 miles per hour with cart owners needing to get a permit through the city.

With nearly 500 carts now registered with the city, councilman Gary Hugi is calling for the city to put a cap on new registrations as well as look to see if the current $25 fee is covering the city’s costs of handling the registrations or if the fee needs to be raised to $35 or $50. Hugi also is calling for recommendations on restraining children who are riding in the back of the carts.  “Safety restraints, we’ve been through this how many times I don’t know. There are children riding on the back of these carts all over, we’ve all seen it. The golf carts drive down the street like they are a vehicle, a big car. They don’t move over to the side like they’re supposed to. I’d like the rest of the council to consider requiring a safety restraint for children 10 and under on these golf carts.”

Police Chief Pete Roth said a lap seat belt installed in carts would not provide the protection at a level of someone being seat belted in a car. Councilman Mike Callanan says adult supervision may be a better answer.  “Possibly we could put some language in there indicating that if a child under a certain age were in the rear-facing seat, they had to have an adult beside them.”

Councilman Bennett Smith says while he shares the concerns about safety and would support any recommendations on that issue brought forth by Chief Roth, he does not support capping the  number of permits or a fee increase. “These have become very popular. I think golf carts and UTVs are an important part of our tourist community, lots of people enjoy them. I think it’s very convenient for people to get around. I’ll wait for any staff recommendations on this, but at this point I would not support a cap on permits or absent a rationale for raising the fee, I would not support that either.”

The topic was discussed during a workshop session held by the council on Thursday with staff directed to bring back recommendations on the topic to the council at a later date.