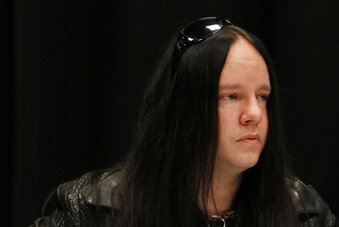 FILE - Slipknot band member Joey Jordison participates in a news conference about the death of bassist Paul Gray on May 25, 2010, in Des Moines, Iowa. Jordison, the founding drummer of the band Slipknot, has died at age 46. Jordison's family says he died peacefully in his sleep Monday, July 26, 2021. (AP Photo/Charlie Neibergall, File)

DES MOINES, Iowa (AP) — Joey Jordison, the founding drummer of the Iowa-based band Slipknot, has died at age 46. Jordison’s family says he died peacefully in his sleep Monday. No cause was given.

Jordison was one of three men who began the influential heavy metal band in Iowa in 1995. They gained fame through their epic and theatrical live shows, in which the band’s nine members wore masks and generated a giant sound.

They gained international fame with their 1999 self-titled album and the 2001 follow-up, “Iowa.”

Jordison was dismissed from the group in 2013. He later said a neurological condition left him unable to play.