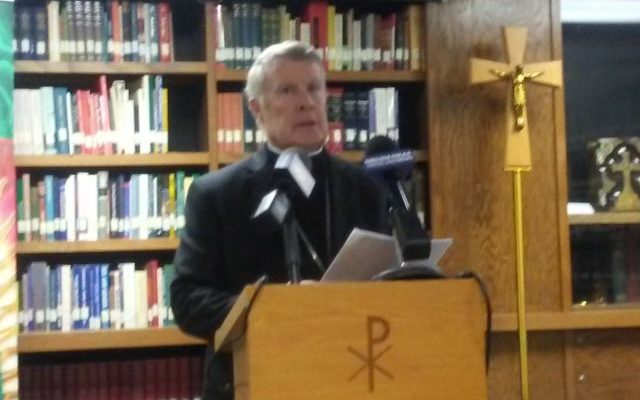 SIOUX CITY — The bishop of the Catholic Diocese of Sioux City has released the names of 28 priests he says were credibly accused of the sexual abuse of minors while serving in the diocese. Bishop R. Walker Nickless held a news conference in Sioux City Monday afternoon.

“To all victims of such abuse as well as advocates and supporters of survivors, I am profoundly sorry for the suffering you have endured,” Nickless said. “As abuse survivors and their advocates have pointed out, apologies are not enough.”

The bishop said he hopes publishing the list marks a new beginning for the diocese.

“As leaders in faith, we must do everything we can to attone and help remedy our church’s sins,” Nickless said, “but we also are committed to minimizing the chance of this happening again.”

Twenty-two of the 28 priests on the list have died. The remaining six men named on the list are no longer priests and only one is living in Iowa. Father Brad Pelzel, the vicar general of the Sioux City Diocese, said under current practice, any accusation against a priest is immediately turned over to local law enforcement for investigation. Staff and volunteers in the diocese now undergo extensive background checks, according to Pelzel.

A seven-member review board investigated allegations against priests in the Sioux City Diocese dating back to 1902, when the diocese was founded. Storm Lake Police Chief Mark Prosser served on the review board and spoke at Monday’s news conference.

“For an allegation to be credible, the review board considered any objective information that was available including consistency of the testimony of witnesses, accuracy of the details — such as the placement of the accused at the time the allegation is said to have taken place and any physical evidence,” Prosser said. “In addition, the board considered other corroborating evidence from files or other possible witnesses.”

Prosser said many of the priests on the list were never formally charged, but the evidence was deemed credible that they had committed acts of abuse.

“The list includes their name, date of ordination, number of allegations — those are based on victims coming forward, whether the victim was male or female, their parish assignments — including their years — and their current status,” Prosser said.

The accusations against the 28 priests came from 107 victims.

“These cases mirror the national trend with abuse beginning in the late 1940s and ’50s and escalating in the ’60s and ’70s,” Prosser said. “By the mid-80s, there was a decline and the long-held belief that abusers could be treated was disproven.”

A summit at the Vatican that concluded this weekend focused on the sexual misconduct of Catholic clergy. Pope Francis has promised guidelines to prevent abuse and punish perpetrators will be reviewed and strengthened.