Shrimp facilities in Webster City, Blairsburg back on track after pandemic 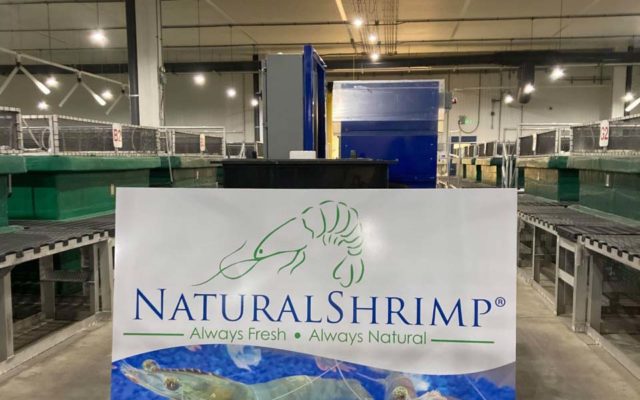 WEBSTER CITY — Iowa is a long way from an ocean, but soon harvesting will begin on a seafood product that’s not usually associated with the Midwest.

The Texas-based company Natural Shrimp is nearing completion of two facilities in north-central Iowa, in Blairsburg and Webster City. CEO Gerald Easterling says supply and vendor issues due to the pandemic have pushed things back a few months.

“We’ve really got a great new design. We’ve shown some really neat shrimp out there, some big shrimp,” Easterling says. “We’re growing them in a combined, recirculating system in pretty high density that people will be excited to see. They’re going to get a high-quality, locally-grown shrimp.”

Tom Untermeyer is the chief technical and operating officer for Natural Shrimp and he’s quite satisfied with the progress at the Iowa plants. “We’ve been able to retrofit the tanks at both Blairsburg with the nursery and then also at Webster City with the grow-out tanks with our patented filtration technology,” Untermeyer says. “It’s been working really well. We’ve been showing how they’re looking here and it’s looking really good.”

Untermeyer is hopeful production for the shrimp facility will begin later this year, during the fourth quarter. “The whole facility doesn’t have to be done before we’re able to actually harvest shrimp because we’re harvesting on a weekly basis,” Untermeyer says. “That way, the last tanks don’t have to be done completely before we start harvesting.”

The company is marketing its product as “Farm to Table Sushi-grade Shrimp.” Find more information about the facility at the website: www.naturalshrimp.com.