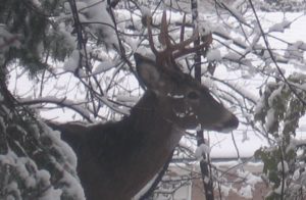 The Department of Natural Resources’ Tyler Harms says hunters harvested nearly 103,000 deer last year and he doesn’t expect that number to drop. “Populations are stable to slightly increasing statewide so they should expect to see similar numbers to last year,” he says. The early archery season started October 1st and Harms says those numbers have been positive. “We’re seeing, harvest is a bit higher than where we were last year, which is a good thing we like to see the hunters are having success in the field during those early seasons,” Harms says, “but 50% of our harvest comes here in the next few weekends in December. And so that’ll really tell us where we’re going to be here at the end of the year once we see what happens during the shotgun seasons.”

The first season runs through December 7th. The weather is forecast to warm up for the weekend — which he says is a plus — because the weather is the one unknown variable that can impact the season. “Things like snow or rain occurring during these weekends is really what impacts harvest, we know that that’s going to both impact deer behavior, and also going to impact hunter behavior as well,” he says. “Most hunters aren’t going to want to be out hunting when it’s raining or when it’s snowing really hard. And so those are really the factors that are going to influence what we could see in harvest here in the next few weeks.”

He says many hunters will tell you deer are a little calmer in the first days of the season, something he believes also. “I think the deer do get wise here, you know, as the seasons progressed here in December. And so perhaps it might be a case of you know, the early hunter gets the deer so to speak,” he says. Harms says northeast and south-central Iowa we tend to see some higher deer densities.

One area that has been down appears to be seeing increases.”We have been watching the deer populations in northwest Iowa very closely. They’ve been below the population goal for a number of years. And so we’ve been working to try to allow those populations to recover to go level and provide some additional opportunity for our hunters,” according to Harms. “And we’re starting to see that in north-central and in northwest Iowa. So that’s encouraging and hopefully, our hunters see the same.”

Harms says hunters need to remember it is required by law that you report a deer harvest by midnight of the day after the deer is taken.