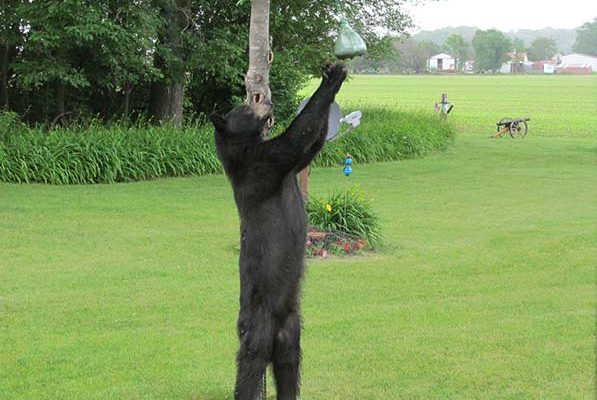 Bear spotted near Osage in 2015

DUBUQUE — Officials say two employees recently saw a bear on John Deere’s property north of Dubuque and Vince Evelsizer of the Iowa Department of Natural Resource suspects it was a male bear — since this is breeding season for bears.

“It’s usually young males — 2-4 year old males — moving around and actively looking for females this time of the year,” he says, “even though it’s so hot out.”

The bears tend to move at night, though, when it’s cooler, according to Evelsizer. There have been several recent black bear sightings in Dubuque County.

“Even a couple of sightings where we got trail camera photos,” Evelsizer says.

Evelsizer, a furbearer biologist, says the animals are likely coming from Minnesota and Wisconsin. If they’re not looking for a mate, they’re probably looking for food.

“They’re most likely at this time of year to get into bird feeders or smelly garbage or people’s barbecues, that type of thing,” Evelsizer says.

As Radio Iowa reported last month, experts like Evelsizer say it’s likely black bears will start to have cubs in Iowa and groups of bears eventually will repopulate in the state. There’s been no recent confirmation baby bears have been born in Iowa, however.

“We anticipate getting some more bears,” Evelsizer says. “There’ll be problems at times with them, but there’ll be fewer problems if we all kind of get used to the idea of living with more bears or trying to coexist.”

Over the next few years the Department of Natural Resources plans to use information from a program called “Bear Wise” to help Iowans get used to having black bears in their neighborhood.