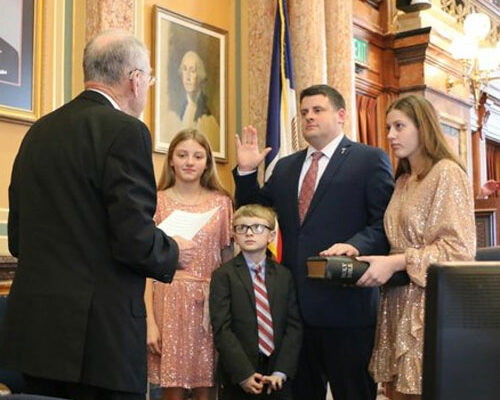 U.S. Senator Grassley swears in his grandson Pat as Speaker of the Iowa House (Photo from Pat Grassley’s Twitter feed)

DES MOINES — U.S. Senator Chuck Grassley was at the Iowa Capitol Monday for the opening day of the state legislature, so he could administer the oath of office to his grandson, who is House Speaker.

Chuck Grassley served 16 years in the Iowa House before his election to congress. State Representative Pat Grassley is entering his 17th year in the Iowa legislature.

“I will guarantee you I will still not being doing this, though, as long as he has, either way,” Pat Grassley said, to laughter, as he addressed the House Monday.

The 89-year-old Grassley is entering his 43rd year in the U.S. Senate and has the most seniority of any current senator. Grassley told reporters when he left the Iowa House in 1974, he wasn’t sure his campaign for a seat in the U.S. House would be successful, as he faced four other candidates in a GOP Primary.

“I was in the hospital, don’t forget, for 10 or 15 days before that primary and so my wife went out and campaigned for me and a lot of other people did and I won the primary with 42% of the vote,” Grassley said. “But at that point, when you’re laying in a hospital bed, you wonder what’s going to happen to you. In fact, I had to wait two days to decide whether they were going to amputate my leg or take care of it another way.”

Grassley had a non-malignant tumor on his left leg. Doctors at the University of Iowa used what was a new procedure at the time to transplant bone chips from Grassley’s hip into the area where bone had been removed from his lower leg.

“Now, if you saw it on X-rays, you’d just see a little mark around where they grafted it in,” Grassley said. “But they took more than two thirds of the bone below the knee.”

Grassley was on crutches for the rest of the 1974 campaign. Grassley then served six years in the U.S. House before his election to the United States Senate in 1980.