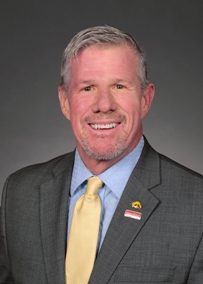 DES MOINES — A key senator says he’ll propose charging educators with a felony if they provide obscene materials to students.

Republican Senator Brad Zaun of Urbandale is chairman of the committee that would vote on the bill. Zaun says he’s concerned about two books in particular that central Iowa school boards have discussed banning.

“It was brought to my attention by several parents, some of the garbage that is being taught to our kids,” Zaun says. “It is not appropriate.”

“All I want our schools to do is teach our kids to be successful when they get out of school, give them the tools that they need,” Zaun says, “and I think we need to put a stop to that garbage.”

“Saying that we’re going to go after teachers and librarians is not going to make Iowa’s public education stronger,” Wahls says.

“Iowa’s brand gets damaged when stories are out there about things that fringe elements in the state are doing or proposing,” Konfrst says.

The legislators made their comments Wednesday during a forum organized by the Greater Des Moines Partnership.