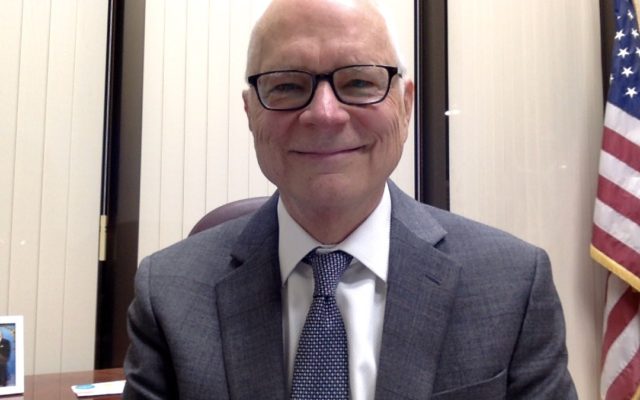 MASON CITY — Mason City mayor Bill Schickel was elected to a fifth term on Tuesday, running uncontested on the ballot.

Schickel, during the “Ask the Mayor” program earlier today on AM-1300 KGLO, says it’s the first time he’s run in an uncontested race and is looking forward to his upcoming term.  “It’s a very exciting time in Mason City, a lot of great things going on. I’m just delighted that the residents saw fit to re-elect the council members.”

With the re-election of three councilmen on Tuesday, it means the council will remain the same for another two years. Schickel says he’s been happy with the way the council has conducted dialogue over the last four years.  “One of the hard things can be to pull people together when people have strong feelings on all sides of an issue is to be able to find the areas where we can work together is probably the biggest challenge, but I think really we’ve been able to do that here in Mason City. You just look at all the things we’re doing, and it’s really a long list, and we’ve been able to accomplish those for the people of Mason City because of a philosophy of working together to get things done.”

With three of the four races for council and mayor being uncontested, and the fourth resulting in the re-election of the incumbent, Schickel views it as a vote of confidence in the way Mason City’s city government is working.  “It reflects well on the city council. It shows the degree of satisfaction among the residents. That doesn’t mean we don’t have our challenges and we don’t have a lot of work and tough decisions ahead of us, we certainly do. The faith that the voters have placed in us for the next four years is just very, very gratifying. I’m very humbled and grateful for it.”

If you missed Schickel’s appearance on the “Ask the Mayor” program earlier today, head to the audio player below to listen or download it — or listen in during the 9 o’clock hour Saturday morning on AM-1300 KGLO.