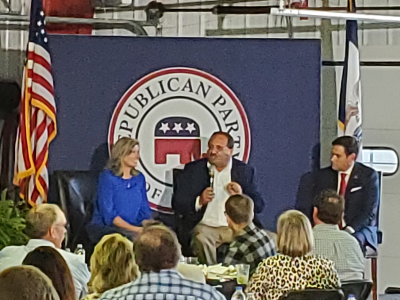 MASON CITY — Hours after the last US troops had departed on Monday, Florida Senator Marco Rubio called the Biden Administration incompetent and arrogant for the handling of the pullout of Afghanistan.

Speaking at an Iowa GOP fundraiser held at the Mason City Municipal Airport last night, Rubio says the pullout plan was based on assumptions that were not real.   “Based on assumptions that weren’t real from the very beginning. Why were those assumptions made? Number one, because of arrogance, because they knew better. They know better than everybody else, they went to certain schools, we’re the grown-ups, we’re in charge now, we’re the opposite of the people that were here before. We know what we’re doing, we’ve got this, that’s what they told everybody.”

Rubio says the Biden Administration wanted to have a hard date on the calendar to pull out of Afghanistan for personal gain instead of the safety of the Americans there.   “They wanted a press conference on 9-11, just like they wanted a press conference right before July 4th to tell everybody the pandemic was over. The new freedom Independence Day…that was about 10 days before they told everybody they had to wear three masks. So now, it’s the same thing with this. The exact same thing that they tried to do. So that’s the incompetence part.”

Rubio says the United States has a black eye now in the world’s view because of Biden’s actions. “This is so damaging to our country, so humiliating, so embarrassing on the world stage, and so immoral…so immoral.”

Rubio compared Biden’s handling of the situation to the attempts to rescue hostages from the US Embassy in Iran after it was seized in late 1979.  “It is one of the biggest catastrophic occurrences of any presidency. I think this tops anything Jimmy Carter ever had happen under his watch, and it’s really inexcusable and both sides know it. Even Democrats know it, and that’s why you don’t see them rallying to the White House’s defense. You cannot defend what is so horrifying and indefensible.”

Rubio finished third in the 2016 Iowa Caucuses behind Ted Cruz and Donald Trump.