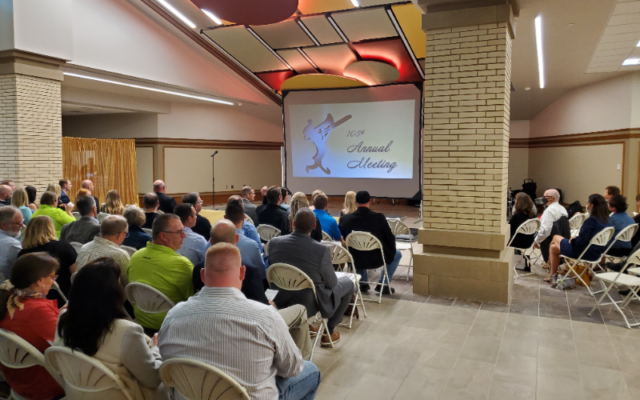 The first event to be held in the indoor portion of the Principal Pavilion was the Mason City Chamber of Commerce annual meeting on Thursday, October 7, 2021

MASON CITY — The ribbon cutting ceremony was held Thursday afternoon for the Principal Pavilion on the north side of the repurposed Southbridge Mall as part of the River City Renaissance project.

Mayor Bill Schickel says two parts of the project are now complete with the opening of the indoor-outdoor performing arts pavilion. “It was less than a year ago in this very spot we broke ground for the Principal Pavilion. Less than a year ago, and 12 months before that, we had the grand opening for the award-winning, one-of-a-kind in the state of Iowa multi-purpose arena right next door — and look what’s happened since. Just look around. Today, we dedicate and cut the ribbon for the Principal performing arts Pavilion — and by the way, under budget, and with the exception of the delivery of a few items that was out of our control, on time, under budget.”

Schickel says the pavilion builds on the musical and arts heritage of Mason City.   “The most important thing is a community where people feel welcome, where people feel a sense of belonging, and when we create spectacular places like this, that’s exactly what we do. That’s the kind of community people want to live in, and that’s the kind of community that people want to move to, so thank you for that.”

The pavilion will be the permanent home for the Mason City Municipal Band and Mason City TubaChristmas and will also serve to accommodate a variety of events, including as a rain site for the North Iowa Band Festival and Friday Night Live events.

Listen to/download audio from Thursday’s ceremony via the audio player below.

As a point of full disclosure, KGLO News Director Bob Fisher is a member of a committee that helped with the development of the pavilion.