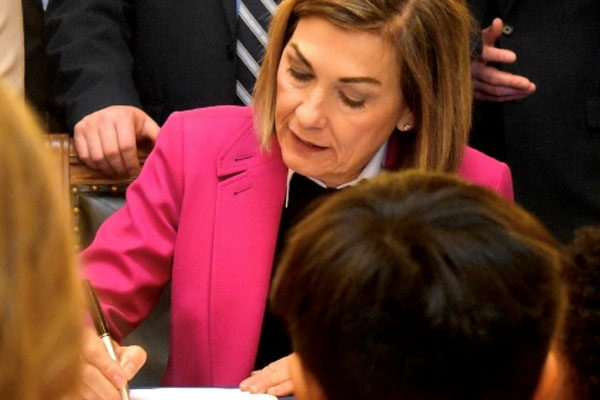 DES MOINES — Governor Kim Reynolds says a state website would be available on Tuesday to provide information to low income parents who want to sign up for nearly $7600 in state funding to cover their child’s private school expenses.

“They can put their name on a list…a place where if they have questions, they can get those answered as well,” Reynolds said early this afternoon.

Reynolds spoke with reporters shortly after signing the bill creating the new program for parents with kids in private schools this fall. In 2026, the state funding will be available for all Iowa families with a student in a private school.

“What an amazing day for our children and parents!” Reynolds said.

A crowd of legislators as well as state and national activists who’ve lobbied for the bill cheered as Reynolds spoke in the Capitol.

“Major progress often comes from being willing to challenge the status quo, to think outside of the box, to be open to change, to lead,” Reynolds said. “…We’re rejecting the idea that the answer to improving education is simply pumping more money into the same system year after year without making significant changes.” 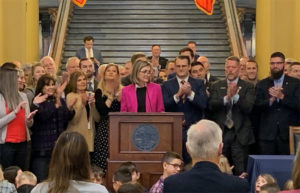 Supporters of the bill surround the governor. (RI photo)

Reynolds proposed far smaller programs in 2021 and 2022, but neither could win enough GOP support in the Iowa House. In the June Primary, the governor campaigned against some House Republican opponents and the bill easily cleared the House last night with 54 Republican “yes” votes. House Speaker Pat Grassley said it’s the culmination of what Republicans have been telling voters.

“We said the Republican Party of Iowa is going to take the lead of education issues in Iowa and I think this is just one more example of us delivering on that promise,” Grassley said, and the governor let out a whoop and led the crowd in applause.

Senate Republican Leader Jack Whitver credited Reynolds for being “tireless” in pursuing this goal. “I also want to thank the many Senate Republicans who fought through the noise and misinformation — as you hear it — in some cases for decades and advocated for all parents to have the same choice in education as parents with the means to afford it,” Whitver said.

Democratic Senator Claire Celsi of Des Moines was the lone protestor, shouting, “Nobody wants vouchers,” during Whitver’s remarks and a few times during the event.

The new program to provide state money to cover private school expenses is on a fast track. The governor said companies that want to compete to manage the state-funded accounts will be able to submit bids starting on Tuesday.