Reynolds signs ‘Back the Blue’ bill into law 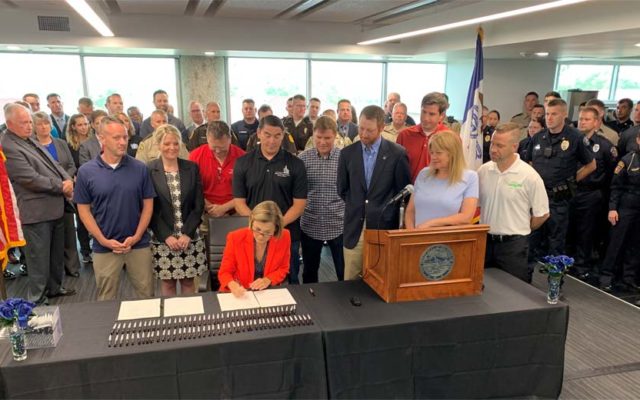 Governor Reynolds signs the “Back the Blue” bill

DES MOINES — Republican Governor Kim Reynolds has signed legislation that establishes tougher penalties for rioting and protests that block pedestrian or vehicle traffic. The law also provides new legal protection to police, so they cannot be sued for most on-duty actions.

“Like so many Iowans, I was raised to be grateful to the heroes who patrol our streets at great personal risk and sacrifice and tragically this fundamental and wholesome part of America’s culture is now under vicious attack,” Reynolds said during a bill signing ceremony at the Iowa Law Enforcement Academy. “…Iowa’s law enforcement will always have my respect and I will always have their back.”

Republican legislature in other states have passed similar bills this year. Iowa’s new law makes rioting a felony and someone convicted of unlawful assembly could be sentenced to up to two years in prison. Reynolds said amid calls to “defund the police,” this bill takes “just the opposite” approach.

“Last summer when lawless mobs across the country co-opted peaceful protests to riot and loot, Iowa experienced its share of unrest,” Reynolds said. “…The public peace is too important and the safety of our officers too precious to tolerate destructive behavior.”

Nearly all Democrats in the legislature voted against the measure, arguing the penalties in the bill were too harsh and that the GOP had turned its back on racial justice efforts.

Reynolds had asked the Republican-led legislature to include proposals to track data from traffic stops and ban racial profiling in the bill, but those were left out. Reynolds told reporters early this morning that she will offer a stand-alone bill in 2022 to accomplish those goals.

“The men and women of law enforcement would be the first to acknowledge we should never be afraid to talk about the ways to improve policing,” Reynolds said in prepared remarks during the bill signing ceremony. “…There’s no contradiction between steadfast support for honorable and selfless police officers — the vast majority –= and a commitment to improving policing.”

Democrat say they doubt Reynolds can convince her fellow Republicans to pass that bill. Governors have 30 days after the legislature concludes to sign or veto bills. Reynolds is taking final action on a few remaining bills today, including one that provides state funding for police department equipment.