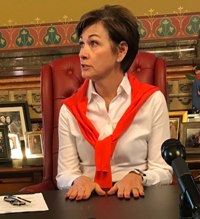 DES MOINES — Governor Kim Reynolds has approved dozens of bills that cleared the 2019 Iowa legislature. This week, Reynolds approved changes that will give governors more power in the nominating process for Iowa Supreme Court justices and appeals court judges.

The new law immediately removes the senior justice of the Iowa Supreme Court from the 17-member panel that selects nominees. That gives the governor authority to choose the majority of nominating commission members.  “They keep referring to this as the governor’s power grab,” Reynolds says. “When we came in, out of the 16 or 17, the majority were Democrats, so it was just a different type of special interest group that was really nominating.”

Reynolds says the plan will also make it easier for rural attorneys to get elected to the commission.  “I’m trying to bring some balance and to a better job of making sure all Iowans are represented,” Reynolds says.

The plan Republican lawmakers approved also forces the Iowa Supreme Court to vote every two years on who should be chief justice.  “As they looked into it, it just made a lot of sense,” Reynolds says.

Current Chief Justice Mark Cady has been leading the court since 2011. Reynolds says no other state supreme court chief justice in the country has that kind of tenure. In the past five decades, two other chief justices have served nearly a decade in the role.